Astronomers using the recently commissioned Gemini North telescope in Hawaii have discovered a protoplanetary disk orbiting one of the stars in a newborn quadruple star system. The dusty disk, about three times the size of Pluto's orbit around the Sun, appears nearly edge-on when viewed from Earth.

Only about 10 edge-on disks like this object have been discovered to date. Out of these 10, only two are in binary star systems, and this new object is the first one discovered in a quadruple star system. The new observations used a technique known as adaptive optics, which partially corrects for the blurring effects of the Earth's atmosphere in images of astronomical sources.

"This is a remarkable demonstration that adaptive optics can help the largest ground-based telescopes reach their full potential," said Ray Jayawardhana, a Miller Research Fellow at the University of California, Berkeley. "We now have a powerful tool to probe the evolution of protoplanetary disks and to look for newborn Jupiter-like planets."

"The new 8- to 10-meter telescopes really need adaptive optics to achieve the highest possible resolution," said the other leader of the team, Kevin Luhman of the Harvard-Smithsonian Center for Astrophysics. "Adaptive optics has come of age, and has allowed us to image a protoplanetary disk in a quadruple star system for the first time."

The findings were reported today in Washington, DC, at the 199th meeting of the American Astronomical Society by a team led by Jayawardhana and Luhman. Other members of the team are Paola D'Alessio (Instituto de Astronomia, Universidad Nacional Autonoma de Mexico) and John Stauffer (SIRTF Science Center, California Institute of Technology).

Adaptive optics works by flexing a thin mirror many times a second into just the right shape to cancel out the effects of roiling air above the telescope. The technique has become regularly available to astronomers only in the last few years. When used on large telescopes, it allows astronomers to obtain images that are as sharp and sensitive as those from space-based observatories such as the Hubble Space Telescope.

Jayawardhana, Luhman and colleagues combined the University of Hawaii's Hokupa'a adaptive optics system with the 8-meter Gemini North telescope to obtain high-resolution infrared images of a wide binary star system. This binary system is only about two million years old, and is part of a small cluster of stars known as MBM 12, located 900 light-years from Earth.

In the new high-resolution images, one of the stars is revealed to be a pair of two closely orbiting stars. What's more, astronomers saw an additional, much fainter and fuzzier object nearby, with two elongated lobes that are separated by a dark lane. This morphology is the distinct signature of a protoplanetary disk that is being viewed edge-on and is blocking the light from the star at its center. The star's light reflecting off the top and bottom surfaces of the disk produces faint nebulosities on either side of the dark lane.

"What we're looking at is an example of a dusty disk that will probably evolve into a young planetary system over the next several million years," explains Jayawardhana, lead author of a paper describing these results submitted to the Astrophysical Journal. "It's the combination of adaptive optics and a large telescope like Gemini that made this discovery possible. Thanks to these sharp images, now we can study the earliest stages of planet formation in remarkable detail."

"We would never have found this object with normal ground-based imaging. To find something this faint next to a bright star and to resolve its structure, adaptive optics on a big telescope like Gemini was essential," concurs Luhman. "Normally, stars with protoplanetary disks are viewed from an angle so that we see the star easily but we see little or nothing of the disk, which is much fainter. Here, we happen to be looking from an angle where the disk blocks the star and makes its presence known."

By analyzing the infrared images of the edge-on disk and the quadruple star system, the research team can learn about both the physical properties of disks from which planets form, and the way in which stars are born in multiple star systems.

The Gemini Observatory is an international collaboration that has built two identical 8-meter telescopes. The telescopes are located at Mauna Kea, Hawaii (Gemini North) and Cerro Pachón in central Chile (Gemini South), and hence provide full coverage of both hemispheres of the sky.

The Gemini Observatory is managed by the Association of Universities for Research in Astronomy (AURA), Inc., under a cooperative agreement with the National Science Foundation (NSF). U.S. participation in the Gemini Project is coordinated by NSF's National Optical Astronomy Observatory in Tucson, AZ, through the U.S. Gemini Program. 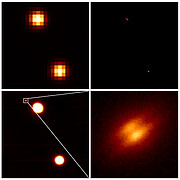 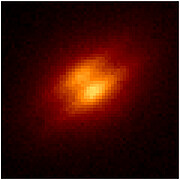