Astronomers from Lowell Observatory, the Massachusetts Institute of Technology, and the Large Binocular Telescope Observatory have discovered an icy planetary body orbiting the Sun beyond Neptune in the Kuiper Belt roughly equal in size to Pluto’s moon Charon.

"This object is intrinsically the brightest Kuiper Belt Object found so far," says Lowell Observatory Director Robert Millis, leader of the survey team. "The exact diameter of 2001 KX76 depends on assumptions that astronomers make about how its brightness relates to its size. Traditional assumptions make it the biggest by a significant amount, while others make it larger by at least 5 percent."

Assuming a reflectivity (or albedo) of 4 percent, 2001 KX76 would have a diameter of approximately 1,270 kilometers (788 miles), bigger than Ceres, the largest known asteroid. For comparison, Pluto’s moon Charon has an estimated diameter of 1,200 kilometers (744 miles).

Earlier this year, a Kuiper Belt Object (KBO) called 20000 Varuna was announced with an estimated diameter of 900 kilometers, based on a calculated reflectivity of 7 percent. Applying this albedo to 2001 KX76 gives it a diameter of roughly 960 kilometers (595 miles).

2001 KX76 was discovered in the course of the Deep Ecliptic Survey, a NASA-funded search for KBOs being conducted by the Lowell-MIT-LBT team using the National Science Foundation’s telescopes at Kitt Peak National Observatory near Tucson, AZ, and Cerro Tololo Inter-American Observatory in Chile. The team spotted 2001 KX76 in deep digital images of the southern sky taken with the 4-meter Blanco Telescope at Cerro Tololo on May 22 by James L. Elliot of MIT and Lawrence H. Wasserman of Lowell Observatory.

2001 KX76 is currently at a distance of just over 6.4 billion kilometers (4 billion miles) from the Sun. Its orbit is inclined by approximately 20 degrees with respect to the orbital plane of the major planets, but the detailed shape of its orbit remains uncertain. Available evidence suggests that the newly discovered KBO may be in an orbital resonance with Neptune, orbiting the Sun three times for each time that Neptune completes four orbits.

The brightness and colors of 2001 KX76 have been measured by Elliot, Susan Kern, and David Osip, all of MIT, with the Raymond and Beverly Sackler Magellan Instant Camera (MagIC) on the 6.5-meter Magellan Telescope at Las Campanas Observatory in Chile. The object has a distinctly reddish color typical of many primitive bodies in the outer Solar System.

"2001 KX76 is so exciting because it demonstrates that significant bodies remain to be discovered in the Kuiper Belt," Millis explains. "We have every reason to believe that objects ranging up to planets as large or larger than Pluto are out there waiting to be found. Until the Kuiper Belt has been thoroughly explored, we cannot pretend to know the extent or the content of the Solar System."

The existence of the Kuiper Belt was postulated by J. A. Fernandez and by M. Duncan, T. Quinn, and S. Tremaine in the 1980s to explain the origin of short-period comets. These comets move around the Sun in the same direction as the planets, and are found in orbits that are tipped only modestly with respect to the ecliptic plane. These researchers showed that short-period comets could not have originated from the more distant spherical Oort Comet Cloud as originally believed. They predicted that a second, more flattened reservoir of "proto-comets" must lie beyond the orbit of Neptune.

The first Kuiper Belt Object was found in 1992 by David Jewitt and Jane Luu of the University of Hawaii. Since then, astronomers have found over 400 KBOs, but tens of thousands likely remain to be discovered. These objects are believed to be remnants from the formation of the Solar System, and consequently are among the most primitive and least-evolved objects available for study by planetary astronomers.

About one-quarter of the known KBOs have been found by the Deep Ecliptic Survey Team. Other members of the team are Marc Buie of Lowell and Mark Wagner of the Large Binocular Telescope Observatory on Mount Graham, AZ. The Deep Ecliptic Survey was recently awarded formal survey status at the National Optical Astronomy Observatory (NOAO), assuring that this reconnaissance of the outer Solar System will continue for the next three years.

Much more precise measurement of KBO diameters will be possible with NASA's upcoming Space Infrared Telescope Facility (SIRTF) mission, due for launch in 2002.

Kitt Peak and Cerro Tololo Inter-American Observatory are part of NOAO, which is operated by the Association of Universities for Research in Astronomy (AURA), Inc., under a cooperative agreement with the National Science Foundation.

The survey team’s research is supported by the NASA Planetary Astronomy Program through grants to Lowell Observatory, Flagstaff, AZ, and MIT in Cambridge, MA. 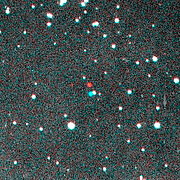