Infrared astronomy pioneer Dr. Fred Gillett died Sunday, April 22, 2001 at the University of Washington Medical Center in Seattle at the age of 64, following a months-long battle with a rare bone marrow disorder.

Gillett was the Project Scientist for the International Gemini Observatory, a pair of advanced 8-meter telescopes located at Mauna Kea, HI, and Cerro Pachon, Chile. Known throughout his career as an effective consensus-builder, Gillett was an early advocate for optimizing the twin Gemini telescopes to focus on infrared science.

"Over the years, I relied greatly on Fred's rigor, quiet wisdom and friendship to guide us through many difficult times on Gemini," said Gemini Director Matt Mountain. "Fred will be greatly missed by all of us. He has left a great void in our hearts and at our Observatory."

"Fred played a key role in the Gemini project from inception to completion," said Sidney Wolff of NOAO, the first director of the project. "He was the one who persuaded the astronomical community that infrared-optimized telescopes should be a top scientific priority. Then he carried out the detailed calculations that showed how to build them--the requirements for telescope design, mirror coatings, and instrument performance. Fred kept us honest."

Before taking on this position in December 1994, Gillett was a member of the International Gemini Science Committee and was the Associate U.S. Gemini Project Scientist in the U.S. Gemini Project Office, which is located at the National Optical Astronomy Observatory (NOAO) in Tucson, AZ. The United States, through the National Science Foundation, is funding nearly half of the Gemini project

Gillett was a staff member at NOAO and Kitt Peak National Observatory from 1973 to 1989, including a period as acting director of Kitt Peak. During the 1970s, he led the effort to develop state-of-the-art infrared detectors and instrumentation at KPNO and to optimize the performance of Kitt Peak's telescopes in the infrared. He earned a B.S. in Physics from the University of Minnesota in 1960, and a PhD in Physics in 1966 from the same institution.

Gillett pioneered the exploration of astronomical sources in the thermal infrared, the region of the electromagnetic spectrum with wavelengths from 8 to 13 microns. Many cool astronomical objects such as planets and dust clouds emit much of their light at these long wavelengths. Gillett's contributions included studies of Saturn, Uranus, and Neptune, observations of the center of the Milky Way, and observations of star forming regions in the galaxy.

"He was a member of a small group who created infrared astronomy as a science," said Michael Merrill, a staff member at NOAO.

The National Optical Astronomy Observatory and the International Gemini Observatory are operated for the National Science Foundation by the Association of Universities for Research in Astronomy (AURA), Inc. "Fred was a tremendous asset for AURA," said AURA President William S. Smith. "His contributions will have a long-lasting impact."

Gillett also was active in space-based astronomy, serving as a visiting scientist in the Astrophysics Division in the Office of Space Science at NASA Headquarters, Washington, DC, from August 1987 to August 1989.

"Fred was an invaluable influence on the progress of every major infrared astronomy mission developed in the past two decades," said Larry Caroff of NASA's Ames Research Center, Mountain View, CA, who has managed several of the space agency's infrared astronomy programs.

Missions that benefited from Gillett's leadership ranged from the groundbreaking Infrared Astronomy Satellite (IRAS) to NASA's involvement in the Infrared Space Observatory (ISO), a European Space Agency mission and the ground-based 2MASS survey, to the yet-to-be-launched Space Infrared Telescope Facility(SIRTF), scheduled to reach orbit in mid-2002, after many years of development. Gillett received NASA's Exceptional Scientific Achievement Medal in 1984 for his work on IRAS.

"Fred was a true pioneer in the development of early instrumentation for mid-infrared spectroscopy, and he was a skilled public servant who was able to maintain community support for SIRTF in very difficult times," said long-time colleague Frank Low, professor emeritus at the University of Arizona's Steward Observatory in Tucson.

Gillett was also known for his extracurricular interest in bicycling. He commuted to work on his bike nearly every day and participated in several major cross-state rides and cross-country tours. He was born on February 7, 1937, in Minot, ND.

A memorial service will be held in Tucson on Saturday, April 28, at 10:30 am at Christ Church United Methodist, 655 North Craycroft Road, Tucson, AZ.

If you would like to make a donation, the family requests that you send it to: 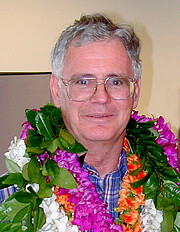