A staff scientist with the National Science Foundation's National Solar Observatory in Tucson, AZ, Livingston pursued his deceptively simple technique at Kitt Peak near Tucson "just to see if it could be done." After some initial false starts, he has developed a "reliable recipe" that enables him to resolve up to two dozen satellites in a single exposure.

Some of the pinprick-sized points of light leave small tails in the image over the 5-6 hour exposure. "These tails suggest that their orbits are not precisely stationary relative to Earth," he says. "Others produce streaks that we interpret as sun glinting briefly off a satellite in a totally different orbit, and a few remain unidentified."

Today's world of global communications depends on roughly 100 commercially built communications satellites that orbit high above Earth's equator at a mean height of 35,786 kilometers (22,220 miles). At this distance, their orbital speed matches the turning of Earth far below, allowing them to appear as a stationary target for television signal reception dishes and ground-based communications antennae. As a result, they are called "geostationary" satellites.

Separated in space by a distance of 50-1,500 kilometers (30-930 miles), these satellites are often shaped like a large oil drum or a box with solar cell-covered wings attached. Their cross-sections can reach more than 25 meters (82 feet) across the axis of the solar panels. This allows them to reflect enough sunlight to reach an astronomical brightness magnitude of about +12, or more than 100 times fainter than the faintest star that the unaided human eye can see.

"Viewed from the ground they are indistinguishable from stars... except, uniquely among extraterrestrial objects, their fixed positions allow them to be photographed by a stationary camera," Livingston explains.

After being recorded on film, the satellites can be identified using basic orbital location ("ephemeris") information off of the Internet at sites such as: http://www.satsig.net/sslist.htm.

Minimal equipment is required. In fact, Livingston places his Hasselblad camera on a solid surface like a rock for maximum stability instead of using a tripod, propping the camera to point skyward and south toward the celestial equator.

Beyond a camera capable of time exposures, Livingston's equipments consists of moderate speed Ektachrome 100-S film, a Zeiss lens with a focal length of 80 mm, and a simple pocket compass to point the camera southward. The "recipe" also requires a dark site well away from city lights, like Kitt Peak, and a moonless, cloudless night.

"This is something that anybody can try to do from a dark location, just for the fun and the challenge," Livingston says.

Stars and gaseous nebulae leave linear streaks in the images, due to the rotation of Earth during the exposure. The images available at the URL above include pointers at the Orion Nebula and the bright star Rigel, as examples. These natural features can be identified with some basic astronomical knowledge and a star chart. 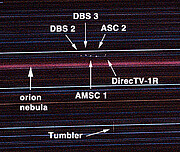