The National Optical Astronomy Observatory's Deep Wide-Field Survey marks its first release of data today with a large, exhibit-sized image of 300,000 faint galaxies and stars at the opening of the 197th meeting of the American Astronomical Society.

This vast visible light image covers 1.15 degrees x 1.15 degrees of the sky, about five times the area of the full Moon, in the constellation Boötes. The image represents only 7 percent of the total data anticipated from this ambitious survey, which is currently mapping two star fields in visible and infrared light. The NOAO Deep Wide-Field Survey (NDWFS) began in Fall 1997 and should be completed by Spring 2002.

An expanded view of 1/25th of the image released today is shown at the upper right. The full-sized image can be seen at Booth 428 of the AAS meeting. Electronic files of this image are available on the Internet at: http://www.noao.edu/image_gallery/html/im0637.html

"If you want to study the formation and cosmic evolution of very large structures, like the sheets and clusters of galaxies we see in the present day Universe, you need a survey deep enough to probe far back in time, and large enough in extent to include multiple examples of the vast structures we want to study," says co-Principal Investigator Buell T. Jannuzi of NOAO. "The NOAO Deep Wide-Field Survey has been designed to do just that."

"We are already discovering many distant galaxies and gaining new insights into their evolutionary history," says co-Principal Investigator Arjun Dey of NOAO. "Our initial results highlight one of the strengths of such deep, wide-field surveys: the ability to collect large numbers of rare objects -- like very distant galaxies -- and study how populations evolve."

Two survey fields were chosen based on their suitability for complementary observations at other wavelengths, from X-rays through radio. Related observations are already planned with the NASA Space Infrared Telescope Facility (SIRTF), the National Science Foundation's Very Large Array at the National Radio Astronomy Observatory, and other ground-based telescopes.

The NDWFS offers a unique combination of coverage area and detection sensitivity as compared to other recent or planned astronomical surveys. For example, the Sloan Digital Sky Survey and 2MASS survey cover a very wide area but are more shallow, and the Hubble Deep Field observations are significantly deeper but cover only 1/900th of the area in the large NDWFS image released today.

Science-quality data will be released to the scientific community shortly after the January 2001 AAS meeting at: archive.noao.edu. More detailed information about the NDWFS is available at: http://www.noao.edu/noao/noaodeep/

The NDWFS has depended on the excellent NOAO telescope operations and instrument support staffs at Kitt Peak and at Cerro Tololo Inter-American Observatory in Chile.

Chris Greer (Northwestern) and Heather Groch (Brown) assisted with the preparation of portions of the data shown in the display image during their participation in the National Science Foundation's "Research Experiences for Undergraduates" program at KPNO. KPNO REU students Michael Cooper (Grinnell) and Felicia Tam (Stanford) worked on other aspects of the survey.

The National Optical Astronomy Observatory is operated for the National Science Foundation by the Association of Universities for Research in Astronomy (AURA), Inc. 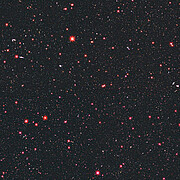