Astronomers, high school teachers and their students have discovered 73 novae in the Andromeda galaxy through a National Science Foundation (NSF) funded education program called "The Use of Astronomy in Research Based Science Education" (RBSE). These results will be presented today by Drs.Travis A. Rector and George H. Jacoby of the National Optical Astronomy Observatory (NOAO), in Tucson, AZ, to the American Astronomical Society meeting in Atlanta, GA. Novae are stellar outbursts that lead to a rapid brightening when mass is transferred between two stars in a binary system, causing the surface layers of one star to ignite explosively from the fusion of hydrogen nuclei.

The novae in Andromeda were discovered by students using images from the NSF's Kitt Peak National Observatory and collectively represent the highest discovery rate for novae found in this galaxy. The long-term goal of this project is to accurately determine the novae production rate for galaxies of different sizes and shape, leading to a greater understanding of the frequency of binary stars and distribution of ages of stars in different galaxies. Novae also play a role in creating much of the nitrogen in the universe, an element critical for the creation of life.

The NSF RBSE Teacher Enhancement program includes a four-week summer workshop for middle and high school teachers interested in incorporating astronomy research within their science classes. RBSE extends the experience to the classroom with materials, datasets, support, and mentors during the academic year. This provides opportunities for students to learn about astronomy and inquiry-based learning as they participate in three ongoing research projects at NOAO: studies of solar activity, a search for novae in local group galaxies, and spectroscopic observations of active galactic nuclei. Attending the Atlanta AAS meeting are teacher Tom Gehringer and his student Matt Harriger of Harry A. Burke High School in Omaha, NE. They are two of the program's participants studying novae in the Andromeda Galaxy. Mr. Gehringer teaches 11th and 12th graders astronomy and earth science, and says that RBSE has "invigorated my efforts to give students the opportunities to do science instead of just memorizing facts and figures. It has inspired me to learn more along with my students."

Rector, the NOAO astronomer who works closely with the RBSE program agrees, saying "it's invaluable to be able to include teachers and students in our research projects because it teaches them how science is really done." Matt Harriger, a junior, and one of Gehringer's students involved in the novae research, feels "it is one of the more exciting things I have been able to do in high school."

For the RBSE novae project, images of galaxies are collected using the NSF's 0.9-meter telescope with a CCD camera on Kitt Peak. Students search images from successive epochs for novae by using a blinking process where images are rapidly alternated using a computer. When a nova appears, its coordinates are recorded. A light curve for each nova is then created by measuring its brightness in each epoch in which it appears. Currently, the RBSE participants are searching for novae in the Andromeda Galaxy, a nearby spiral galaxy similar in stellar content and size to our own Milky Way. A nova is created in a binary star system, where a white dwarf has a nearby companion star. As the companion loses hydrogen gas, the gas falls onto the white dwarf, causing an instability near its surface. An explosive nuclear reaction occurs, causing the white dwarf to shine brightly as a nova.

The NOAO-based RBSE program will hold its fourth annual workshop in Tucson, AZ during the summer of 2000. 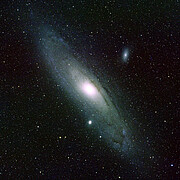