The discovery of the most distant large-scale cluster of galaxies in the very young Universe has astronomers puzzling over how it formed so rapidly.

Crucial observations by a collaboration of telescopes including Gemini Observatory, Subaru Telescope, and W. M. Keck Observatory, all on Hawaii’s Maunakea, have helped an international team of astronomers to discover the most distant cosmic collection of galaxies caught in the act of forming in the early Universe. Known as z660D, this puzzling protocluster — a large and scattered collection of young gas-rich galaxies — is feverishly creating stars some 13 billion light years away. It is the most distant large-scale structure of galaxies ever detected. Full details are published in the 30 September 2019 issue of The Astrophysical Journal. The preprint is available here.

“This discovery suggests that large-scale structures already existed when our Universe was only about 800 million years old,” explained lead author Yuichi Harikane from the National Astronomical Observatory of Japan. “That’s just 6% of the Universe’s current age of 13.8 billion years. In addition to its impressive age, this protocluster is in the fast lane to formation.”

“As we continue to find rare and essential objects like this protocluster of galaxies in the early history of our universe, collaboration of major facilities often becomes necessary,” added Chris Davis of the National Science Foundation, which provides support for the international Gemini Observatory. “Big telescopes can bring something unique to the table. In Gemini’s case, optical spectroscopy has always been a great strength and a powerful tool for discovery.”

The study began with a wide-field search for protocluster candidates using the wide-field Hyper Suprime-Cam imager on the 8-meter Subaru telescope on Maunakea, Hawai‘i. “During the survey the team encountered z660D, where galaxies are 15 times more concentrated than average,” said Chien-Hsiu Lee of the National Optical Astronomy Observatory (NOAO) who participated in the imaging survey. The team then used the sensitive Gemini Multi-Object Spectrograph (GMOS) on the 8-meter Gemini North telescope also on Maunakea to capture the chemical fingerprints of half of the individual galaxies in the protocluster. These data, coupled with similar spectroscopic data from the neighboring Keck Observatory and the Magellan Telescope in Chile, confirmed that z660D was unmistakably the most distant protocluster ever detected, lying 13.0 billion light years away.

“Confirmations by Gemini led to Keck follow-up for fainter galaxies in z66OD,” said Harikane. “With Gemini data we confirmed the first six galaxies in the protocluster were indeed present, instead of just being foreground objects and we found the most surprising aspect about this protocluster, the location of its Himiko.”

One of the 12 galaxies in z66OD is a “Himiko” object — an enormous protogalaxy with a huge gas halo caught at the moment of its formation. Masami Ouchi, a team member at National Astronomical Observatory of Japan and the University of Tokyo, discovered the first object of this type in 2009 and named it after a legendary queen in ancient Japan.

“It is reasonable to find a giant and massive object like Himiko in a protocluster which is also thought to be massive,” Ouchi said. But what is surprising is that the Himiko in z660D does not lie near the center of the galaxy distribution. “Strangely enough, it lies on the edge, 500 million light years away from the cluster’s center. Deciphering the reason will be key to understanding its role in the formation of the protocluster.”

The galaxies in z66OD appear to be powered by prodigious bursts of star formation. Indeed, the team’s further studies of the galaxies with the Subaru telescope, United Kingdom Infra-Red Telescope, and Spitzer Space Telescope revealed surprisingly active star formation in the z66OD protocluster. The number of stars forming per year in the protocluster is a startling five times larger than that in other galaxy groupings with similar masses that have been observed in the early Universe. Each galaxy is an efficient star factory, probably due to the large amount of gas (the principal ingredient of stars) that the very massive z660D system provides.

Equally curious is that while previous observations have suggested that protoclusters this early in the universe should contain a massive dusty galaxy, z660D does not appear to have one. “Although we haven’t found such a galaxy in z66OD yet,” commented Seiji Fujimoto, team member at Waseda University, Japan, “future observations, for example with the Atacama Large Millimeter/submillimeter Array (ALMA) in Chile, should reveal more of the structure of z66OD.”

Until then, objects like z660D pose a formidable challenge to astronomers trying to understand the formation of some of the largest structures in the Universe.

In the Early Universe, astronomers postulate that “seeds” of dark matter — material that scientists cannot directly observe — in a hot soup of particles and energy were gravitationally attracted over billions of years to form the largest structures observed in the cosmos today: clusters and superclusters of galaxies that are interconnected by web-like filaments and separated by sponge-like voids that span hundreds of millions of light-years.

How these early structures formed is one of the key areas of research in astronomy today. Current thinking is that a few hundred million years after the Big Bang, the distribution of matter in the Universe produced very dense knots at the intersections of the sheets and filaments that make up the web. In these knots, the density of ordinary matter was so high that the formation of stars and galaxies became possible. 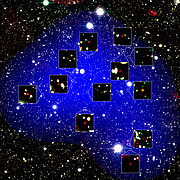