Fast Radio Bursts (FRBs), sudden rapid explosions of energy from space, have challenged astronomers since their discovery in 2007. Typically lasting only a few milliseconds, many questions remain, including what powers these bursts, their distance beyond our galaxy, and what their host galaxies might look like.

"Now, thanks to deep Gemini observations, we know that at least one of these FRBs originated in a discrete source within a distant dwarf galaxy located some three billion light-years beyond our Milky Way Galaxy," said Shriharsh Tendulkar of McGill University in Montreal, Canada.

Tendulkar and an international team of astronomers presented the results today at the 229th meeting of the American Astronomical Society in Grapevine, Texas. The characterization of the host galaxy was published in The Astrophysical Journal Letters, and accompanied the research team’s results on a campaign to precisely locate the FRB, published in the journal Nature.

The story began with the detection of a burst denoted FRB 121102 which was discovered in November of 2012 at the Arecibo Observatory in Puerto Rico. However, unlike the other 17 known FRBs, this one repeated itself and allowed astronomers to watch for it using the National Science Foundation's Karl G. Jansky Very Large Array (VLA). The VLA radio telescope, composed of 27 antennas in New Mexico, has the ability to see the fine detail necessary to precisely determine the object's location in the sky.

In 83 hours of observing time over six months in 2016, the VLA detected nine bursts from FRB 121102. "For a long time, we came up empty, then got a string of bursts that gave us exactly what we needed," said Casey Law, of the University of California at Berkeley.

"The VLA data allowed us to narrow down the position very accurately," said Sarah Burke-Spolaor, of the National Radio Astronomy Observatory (NRAO) and West Virginia University.

"Once we were able to accurately pinpoint the burst’s location in the two-dimensional sky we enlisted the 8-meter Gemini North telescope on Maunakea in Hawai‘i to characterize the corresponding host galaxy," said Paul Scholz formerly of McGill University and now with the National Research Council of Canada (NRC). "The Gemini observations did that, and for the first time with an FRB, left no doubt about its origin."

"The host galaxy for this FRB appears to be a very humble and unassuming dwarf galaxy, which is only about 1% of the mass or our Milky Way Galaxy," said Tendulkar, who adds that Gemini not only imaged the galaxy, but obtained a spectrum which characterized the galaxy and provided an estimate of its redshift (velocity away from us due to the expansion of the Universe) and thus its distance. "This really gave us a three dimensional lock on the home of this FRB."

"It is surprising that the host would be a dwarf galaxy," adds Tendulkar. "One would generally expect most FRBs to come from large galaxies which have the largest numbers of stars and neutron stars. Neutron stars – remnants of massive stars – are among the top candidates to explain FRBs.

Tendulkar notes that this dwarf galaxy has fewer stars, but is forming them at a high rate, which may suggest that FRBs are linked to younger neutron stars. Two other classes of extreme events – long duration gamma-ray bursts and superluminous supernovae – frequently occur in dwarf galaxies, as well. "This discovery may hint at links between FRBs and those two kinds of events," suggests Tendulkar.

"The collaboration of Gemini working with radio telescopes around the world, each looking at the Universe in such different ways, is what allowed us to make this breakthrough," said Shami Chatterjee, of Cornell University. "The simple fact that we have uncovered an extragalactic host for a fast radio burst is a huge advance in our understanding," he added.

"This impressive result shows the power of several telescopes working in concert – first detecting the radio burst and then precisely locating and beginning to characterize the emitting source," said Phil Puxley, a program director at the National Science Foundation that funds the VLA, Very Long Baseline Array (VLBA), Gemini and Arecibo observatories. "It will be exciting to collect more data and better understand the nature of these radio bursts."

"FRBs are an exciting new area in astrophysics and the CHIME telescope at DRAO is ideal for detecting large numbers of them across the whole sky," says Sean Dougherty, Director of the National Research Council of Canada (NRC) Dominion Radio Astrophysical Observatory (DRAO). In addition to funding a significant portion of Gemini, NRC hosts the Canadian Hydrogen Intensity Mapping Experiment (CHIME) which is an interferometric radio telescope under construction at DRAO in British Columbia. CHIME will survey half the sky each day in search of radio transients. 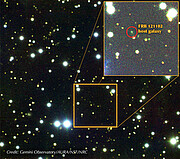