Despite being infamously demoted from its status as a major planet, Pluto (and its largest companion Charon) recently posed as a surrogate extrasolar planetary system to help astronomers produce exceptionally high-resolution images with the Gemini North 8-meter telescope. Using a method called reconstructive speckle imaging, the researchers took the sharpest ground-based snapshots ever obtained of Pluto and Charon in visible light, which hint at the exoplanet verification power of a large state-of-the-art telescope when combined with speckle imaging techniques. The data also verified and refined previous orbital characteristics for Pluto and Charon while revealing the pair’s precise diameters.

“The Pluto-Charon result is of timely interest to those of us wanting to understand the orbital dynamics of this pair for the 2015 encounter by NASA's New Horizons spacecraft,” said Steve Howell of the NASA Ames Research Center, who led the study. In addition, Howell notes that NASA’s Kepler mission, which has already proven a powerful exoplanet discovery tool, will benefit greatly from this technique.

Kepler identifies planet candidates by repeatedly measuring the change in brightness of more than 150,000 stars to detect when a planet passes in front of, or affects the brightness of, its host star. Speckle imaging with the Gemini telescope will provide Kepler's follow-up program with a doubling in its ability to resolve objects and validate Earth-like planets. It also offers a 3- to 4-magnitude sensitivity increase for the sources observed by the team. That’s about a 50-fold increase in sensitivity in the observations Howell and his team made at Gemini. “This is an enormous gain in the effort underway to confirm small Earth-size planets,” Howell added.

"This was a fantastic opportunity to bring DSSI to Gemini North this past July," said Horch. "In just a little over half an hour of Pluto observations, collecting light with the large Gemini mirror, we obtained the best resolution ever with the DSSI instrument –– it was stunning!"

The resolution obtained in the observations, about 20 milliarcseconds, easily corresponds to separating a pair of automobile headlights in Providence, Rhode Island, from San Francisco, California. To achieve this level of definition, Gemini obtained a large number of very quick “snapshots” of Pluto and Charon. The researchers then reconstructed them into a single image after subtracting the blurring effects and ever-changing speckled artifacts caused by turbulence in the atmosphere and other optical aberrations. With enough snapshots (each image was exposed for only 60 milliseconds or about 1/20 of a second) only the light from the actual objects remains constant, and the artifacts reveal their transient nature, eventually canceling each other out.

DSSI was built at SCSU between 2007-2008 as a part of a United States National Science Foundation Astronomical Instrumentation grant and mounted on the Gemini North telescope for a limited observing run. The instrument is likely to return to Gemini North for observations in mid-2013 for general user programs from across the international Gemini partnership. Any such arrangement will be announced along with the call for proposals for Semester 13B, in February 2013.

This work was funded in part by the National Science Foundation and NASA’s Kepler discovery mission and will be published in the journal Publications of the Astronomical Society of the Pacific in October 2012.

The Differential Speckle Survey Instrument (DSSI) was built at Southern Connecticut State University (SCSU) between 2007-2008 as a part of a NSF Astronomical Instrumentation grant on which Elliott Horch was the principal investigator. Together with student collaborators, Horch designed and assembled the instrument, and wrote the instrument control software. In 2008 DSSI was shipped to the WIYN Observatory at Kitt Peak, where it has been used since September 2008 for both Kepler follow-up observations and a NSF-funded project to study binary stars discovered by Hipparcos. In late 2009, the detectors for the instrument were upgraded from two low-noise CCDs to two electron-multiplying CCDs, one purchased by the Kepler Science Office and the other by SCSU. DSSI is the world's first two-channel speckle imaging instrument. 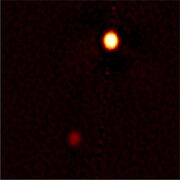