"They couldn't just go away," says University of California at Berkeley graduate student Nicholas McConnell, who is first author of a paper in the December 8, 2011 issue of the journal Nature. "So where are these black holes hiding now?" McConnell asks.

The discovery of these two supermassive black holes, each approaching 10 billion times the mass of the Sun, is providing answers to this question.

At this stage, it's too early to tell whether these two black holes are a rare find or just the tip of the iceberg, says McConnell. In the next few years, we plan to examine a dozen or more of the largest galaxies in the local universe to look for more black holes of similar masses. Finding more will confirm that the universe once contained prime real estate for growing giant black holes.

McConnell and his advisor and team-leader Chung-Pei Ma were joined by researchers from the universities of Texas, Michigan, the Dunlap Institute for Astronomy and Astrophysics at the University of Toronto, Canada, as well as the National Optical Astronomy Observatory (NOAO) in Arizona.

“The boisterous quasars that we see when we look back in time at the young universe may have passed through a turbulent youth to become the quiescent giant elliptical galaxies we see today,” says Ma. The black holes at the centers of these galaxies are no longer fed by accreting gas and have become dormant and hidden. We see them only because of their gravitational pull on nearby orbiting stars. ”The question remains whether there is a limit as to how big a black hole can get. “Larger black holes tend to live in bigger parent galaxies so,” Ma continues, “is it nature or nurture that determines how large a black hole can grow?"

In addition to the Gemini observations, follow-up data from the W.M. Keck and McDonald observatories supported the team’s conclusion that these black holes are record-holders. “We believe that 10-billion solar mass black holes like these are the ultimate power sources for the distant quasars observed in the early universe, one to three billion years after the Big Bang,” says James Graham of the Canadian Dunlap Institute. A video interview with Graham and McConnell is available at: http://vimeo.com/32575164 – pw: 2011December08.

McConnell adds that while the galaxies studied are relatively close, it is extremely difficult to observe the stars within about 1000 light-years of the black hole at a distance of about 300 million light-years. Only stars orbiting in this small region surrounding the black hole are sensitive enough to the hole's gravity to be used to determine its mass. "This means we need exquisite observing conditions and the latest technology to have any hope of seeing what's going on around the black hole," McConnell explains.

The two black holes discovered in this research are more than two thousand times bigger than the one that resides at the center of our Galaxy, which has a mass of about 4 million times that of our Sun. Team member Tod R. Lauer of NOAO notes that the event horizons (the region inside of which light can no longer escape) of these black holes are far larger than our Solar System. Each is five to ten times bigger than Pluto's orbit.

The previous entry into the most massive black hole race was led by Karl Gebhardt from the University of Texas Austin (also on the research team making this discovery). At the American Astronomical Society meeting in January 2011, he reported that the black hole in the giant elliptical galaxy M87 was 6.3 billion times the mass of our Sun (see Gemini press release at: http://www.gemini.edu/node/11588). "They just keep getting bigger!” says Gebhardt. “My record holder in M87 is now dwarfed by about a factor of two by both of these new discoveries. It's all very exciting!"

The research was supported by the National Science Foundation, the National Aeronautics and Space Administration, and UC Berkeley's Miller Institute for Basic Research in Science. 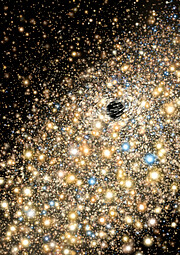