The Most Distant Quasar

Both Headache And Opportunity

An international team of astronomers announced today the discovery of the most distant known supermassive black hole, seen as a luminous quasar [1] caused by gas falling into the black hole.

The discovery came to light using data from an ongoing infrared sky survey being conducted at the United Kingdom Infrared Telescope (UKIRT) and critical follow-up confirmation observations with the Gemini North telescope, both on Mauna Kea in Hawai'i. The results are presented in the June 30, 2011 issue of the Journal Nature [2].

The light from the quasar started its journey toward us when the universe was only 6% of its present age, a mere 770 million years after the Big Bang, at a redshift of about 7.1 [3]. "This gives astronomers a headache," says lead author Daniel Mortlock, from Imperial College London. "It's difficult to understand how a black hole a billion times more massive than the Sun can have grown so early in the history of the universe. It's like rolling a snowball down the hill and suddenly you find that it's 20 feet across!"

However, as well as being a headache, the new quasar is a great opportunity, because it allows scientists to measure the conditions in the gas that the quasar's light passes through on its way to us. "What is particularly important about this source is how bright it is," says Mortlock. "It's hundreds of times brighter than anything else yet discovered at such a great distance. This means that we can use it to tell us for the first time what conditions were like in the early universe."

Cosmologists are extremely keen to measure the state of gas in the early universe, to understand the process of how stars and galaxies formed. Most of the gas in the universe is hydrogen, and most of it is ionized at the present time, meaning that the electrons have been stripped off the protons. As one looks further away and thus further back in time, one should eventually reach the time when the gas was neutral, with the electrons and protons combined as atoms, before most of the stars in the universe have formed, over 12 billion years ago. The transition between these periods is the epoch of reionization, a milestone in cosmic history. The light from the new quasar displays the characteristic signature of neutral gas. This signature, showing the quasar is beyond the epoch of reionization, was predicted in 1998 but has never been observed before. "Being able to analyze matter at this critical juncture in the history of the universe is something we've been long striving for but never quite achieved. Now it looks like we have crossed the barrier with this observation," said Prof. Steve Warren, leader of the quasar team. "It's like discovering a new continent which we can now explore."

The quasar, named ULAS J1120+0641, was discovered in the UKIRT Infrared Deep Sky Survey (UKIDSS) a new map of the sky at infrared wavelengths. Such very distant, highly redshifted objects are much more easily found in infrared light [4]. "It was for just this sort of discovery that we began this ambitious survey in 2005," said Prof. Gary Davis, Director of UKIRT. To find the quasar the team sifted through images of over 10 million sources. "We'd been searching for five years, and hadn't found anything, and were beginning to lose heart," said Warren. "It gave us a terrific jolt when we found it as we hadn't really expected to discover anything quite so far away."

To confirm that the object was really a distant quasar and measure its distance, in December 2010 the team made further observations with the 8-meter Gemini North telescope, UKIRT's neighbor on Mauna Kea, using the Gemini Near-Infrared Spectrograph (GNIRS). "The timing was perfect…" recalled Kathy Roth, an astronomer at Gemini Observatory, "…as we got the observation request just days after the spectrograph had been made available for science use at Gemini North. Once the measurements were made it became immediately obvious they had found what they were looking for." The team then quickly collected an additional set of detailed observations, with telescopes at the European Southern Observatory (ESO), and in the Canary Islands [5]. Collectively, these observations from many facilities allowed a detailed study of the properties of the quasar itself, and of the surrounding gas.

The team plans further detailed observations of ULAS J1120+0641, but also hope to find more such distant but bright quasars. "There may be 100 such objects spread around the whole sky," says Mortlock, "but finding them amongst the billions of other objects in astronomical images is a serious challenge!"

[1] Quasars are the most luminous objects known. They are thought to be the result of gas in a swirling disk accreting onto a supermassive black hole sitting at the center of a distant galaxy – as the gas falls in it gets extremely hot and emits radiation. The black hole slowly grows as it "swallows" more gas. At 770 million years after the Big Bang, there is barely enough time for a black hole to grow to two billion solar masses even if it is swallowing gas at the maximum possible (theoretical) rate.

[3] The UKIRT Infrared Deep Sky Survey [UKIDSS] is a project to map a large area of sky in infrared light, to much fainter light levels than attempted before. The new quasar ULAS J1120+0641 comes from a component called the "Large Area Survey (LAS)." The prefix J and the numbers refer to the quasar's position on the sky. The survey uses a very large infrared camera called Wide Field Camera (WFCAM) which was built at the Astronomy Technology Center (ATC) at the Royal Observatory Edinburgh. The observations are made at the United Kingdom Infrared Telescope (UKIRT) on the summit area of Mauna Kea in Hawai'i. Both the ATC and UKIRT are establishments of the UK's Science and Technology Facilities Council (STFC).

One of the world's largest telescopes dedicated solely to infrared astronomy, the 3.8-metre (12.5-foot) United Kingdom Infrared Telescope (UKIRT) is sited near the summit of Mauna Kea, Hawaii, at an altitude of 4194 metres (13760 feet) above sea level. It is operated by the Joint Astronomy Centre in Hilo, Hawaii, on behalf of the UK Science and Technology Facilities Council. UKIRT's technical innovation and privileged position on the high, dry Mauna Kea site have placed it at the forefront of infrared astronomy since its opening in 1979. More about the UK Infrared Telescope.

About the Gemini Observatory

The Gemini Observatory is an international collaboration with two identical 8-meter telescopes. The Frederick C. Gillett Gemini Telescope is located on Mauna Kea, Hawai'i (Gemini North) and the other telescope on Cerro Pachón in central Chile (Gemini South); together the twin telescopes provide full coverage over both hemispheres of the sky. The telescopes incorporate technologies that allow large, relatively thin mirrors, under active control, to collect and focus both visible and infrared radiation from space.

The Gemini Observatory provides the astronomical communities in seven partner countries with state-of-the-art astronomical facilities that allocate observing time in proportion to each country's contribution. In addition to financial support, each country also contributes significant scientific and technical resources. The national research agencies that form the Gemini partnership include: the US National Science Foundation (NSF), the UK Science and Technology Facilities Council (STFC), the Canadian National Research Council (NRC), the Chilean Comisión Nacional de Investigación Cientifica y Tecnológica (CONICYT), the Australian Research Council (ARC), the Argentinean Consejo Nacional de Investigaciones Científicas y Técnicas (CONICET) and the Brazilian Conselho Nacional de Desenvolvimento Científico e Tecnológico CNPq). The observatory is managed by the Association of Universities for Research in Astronomy, Inc. (AURA) under a cooperative agreement with the NSF. The NSF also serves as the executive agency for the international partnership.

Gemini observatory is managed by the Association of Universities for Research in Astronomy, Inc. (AURA) under a cooperative agreement with the NSF. The NSF also serves as the executive agency for the international partnership.

PR Image gemini1107b
The Most Distant Quasar: Both Headache And Opportunity 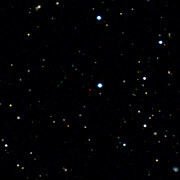 PR Image gemini1107c
The Most Distant Quasar: Both Headache And Opportunity