A New Gemini Podcast, In October of 2010, the Gemini South primary mirror received a shiny new coating of protected silver. A new two-part podcast allows you to experience an insider's view of this exciting process, one that few outside of Gemini have ever witnessed. Navigate to the Podcast by clicking on the video clip below.

For the second consecutive year, high school students from across Australia joined in a competition to obtain scientifically useful (and aesthetically pleasing) images using the Gemini Observatory. The spectacular result of this contest, organized by the Australian Gemini Office (AusGO), is revealed here. As the 2010 winning student team suggested, Gemini targeted an interacting galaxy pair which, they assured, “would be more than just a pretty picture.”

The team, made up of students from the Sydney Girls High School (SGHS) Astronomy Club in central Sydney, proposed that Gemini investigate the galaxy pair NGC 6872 and IC 4970 (see Figure 1). The two galaxies are embraced in a graceful galactic dance that, as the team described in the essay to support their entry, “…will also serve to illustrate the situation faced by the Milky Way and the Andromeda galaxy in millions of years.”

The Gemini Multi-Object Spectrograph (GMOS), in its imaging mode on the Gemini South telescope in Chile, collected the photons for the stunning new image. At an event held at SGHS on March 22, 2011 (see Figure 2), the winning team and teachers viewed the image for the first time and filled the room with “oohs” and “aahs” when Christopher Onken (Australian National University/AusGO) unveiled it. Assisting Onken, Angel López-Sánchez (Australian Astronomical Observatory/Macquarie University) highlighted many features of the image and explained galaxy interactions using computer animations and simulations.

The primary galaxy in the image (NGC 6872) exemplifies what happens when galaxies interact and their original structure and form is distorted. When galaxies like these grapple with each other, gravity tugs at their structures, catapulting spiral arms out to enormous distances. In NGC 6872, the arms have been stretched out to span hundreds of thousands of light-years—many times further than the spiral arms of our own Milky Way galaxy. Over hundreds of millions of years, NGC 6872’s arms will fall back toward the central part of the galaxy, and the companion galaxy (IC 4970) will eventually be merged into NGC 6872. The coalescence of galaxies often leads to a burst of new star formation. Already, the blue light of recently created star clusters dot the outer reaches of NGC 6872’s elongated arms. Dark fingers of dust and gas along the arms soak up the visible light. That dust and gas is the raw material out of which future generations of stars could be born.

Searching for these dynamics was a key feature in the essay written by the winning team. To justify the scientific merit of obtaining this image, the team suggested that, “If enough colour data is obtained in the image it may reveal easily accessible information about the different populations of stars, star formation, relative rate of star formation due to the interaction, and the extent of dust and gas present in these galaxies.” The team also presented a more emotional perspective by looking at the impact this image might have on people trying to understand our place in the universe. When viewers consider this image “in contrast to their daily life,” the team explained, “there is a significant possibility of a new awareness or perception of the age and scale of the universe, and their part in it.”

Once the student essays from across Australia were submitted, a volunteer committee (representing science, education, journalism and art) carefully reviewed the submissions to determine a winner. Once the winning team emerged, work began to collect the data. Travis Rector (University of Alaska, Anchorage) planned the details of the observations and selected filters that would bring out the beautiful features of the colliding galaxies when the image was obtained later in 2010.

All three of the top entries earned their classes a “Live from Gemini” event, using a video link between the students and the Gemini control room, for an interactive introduction to the observatory by members of Gemini’s Public Information and Outreach Office. Each of the classes came prepared with probing questions about black holes, galaxies, and exoplanets, which were answered by staff at Gemini's base facility in Hilo Hawai‘i.

Ian Lightbody, who advised the Runner-Up school of Forest Lake College, comments, “The students had a great time and learned a lot. I know I did!” 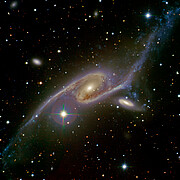