A planet only about eight times the mass of Jupiter has been confirmed orbiting a Sun-like star at over 300 times farther from the star than the Earth is from our Sun. The newly confirmed planet is the least massive planet known to orbit at such a great distance from its host star. The discovery utilized high-resolution adaptive optics technology at the Gemini Observatory to take direct images and spectra of the planet.

First reported in September 2008 by a team led by David Lafrenière (then at the University of Toronto, now at the University of Montreal and Center for Research in Astrophysics of Quebec), the suspected planetary system required further observations over time to confirm that the planet and star were indeed moving through space together. “Back in 2008 what we knew for sure was that there was this young planetary mass object sitting right next to a young Sun-like star on the sky,” says Lafrenière. The extremely close proximity of the two objects strongly suggested that they were associated with each other but it was still possible (but unlikely) that they were unrelated and only aligned by chance in the sky. According to Lafrenière, “Our new observations rule out this chance alignment possibility, and thus confirms that the planet and the star are related to each other.”

With this confirmation by Lafrenière and colleagues, the system, known as 1RXS J160929.1-210524 (or 1RXS 1609 for short), provides scientists with a unique specimen that challenges planetary formation theories due to its extreme separation from the star. "The unlikely locale of this alien world could be telling us that nature has more than one way of making planets," says co-author Ray Jayawardhana of the University of Toronto. "Or, it could be hinting at a violent youth when close encounters between newborn planets hurl some siblings out to the hinterlands," he adds.

With its initial detection by the team using the Gemini Observatory in April of 2008 this object became the first likely planet known to orbit a sun-like star that was revealed by direct imaging. At the time of its discovery the team also obtained a spectrum of the planet and was able to determine many of its characteristics, which are confirmed in this new work. “In retrospect, this makes our initial data the first spectrum of a confirmed exoplanet ever!” says Lafrenière. The spectrum shows absorption features due to water vapor, carbon monoxide, and molecular hydrogen in the planet’s atmosphere.

Since the initial observations several other worlds have been discovered using direct imaging, including a system of three planets around the star HR 8799 also discovered with Gemini. However, the planets around HR 8799 orbit much closer to their host star.

The team’s recent work on 1RXS 1609 also verified that no additional large planets (between 1-8 Jupiter masses) are present in the system closer to the star. Future observations may shed light on the origin of this mysterious far-out planet. In particular, in a few years, it should be to possible to detect a slight difference in motion between the planet and its star due to their mutual orbit. Co-author Marten van Kerkwijk (University of Toronto) notes that the difference will be “very small,” since the fastest possible orbital period is more than one thousand years. But he adds that by using Gemini it should be possible to measure a very precise velocity of the planet relative to its host. This will show whether the planet is likely on a roughly circular orbit, as would be expected if it really formed far from its host star, or whether it is in a very non-circular or even unbound orbit, as could be the case if it formed closer to its star, but was kicked out in a close encounter with another planet.

The host star is located about 500 light-years away in a group of young stars called the Upper Scorpius association that formed about five million years ago. The original survey studied more than 85 stars in this association. The planet has an estimated temperature of about 1800 Kelvin (about 1500 degrees Celsius) and is much hotter than Jupiter, which has a atmospheric cloud-top temperature of about 160 Kelvin (-110 degrees Celsius). The host star has an estimated mass of about 85% that of our Sun. The young age of the system explains the high temperature of the planet. The contraction of the planet under its own gravity during its formation quickly raised its temperature to thousands of degrees. Once this contraction phase is over, the planet slowly cools down by radiating infrared light. In billions of years, the planet will eventually reach a temperature similar to that of Jupiter.

The observations used the Near-Infrared Imager (NIRI) and the Altair adaptive optics system on the Gemini North telescope. Adaptive optics allows scientists to remove much of the distortions caused by our atmosphere and dramatically sharpen views of space. “Without adaptive optics, we would simply have been unable to see this planet,” says Lafrenière. “The atmosphere blurs the image of a star so much that it extends over and is much brighter than the image of a faint planet around it, rendering the planet undetectable. Adaptive optics removes this blurring and provides a better view of faint objects very close to stars.”

The Gemini Observatory is an international collaboration with two identical 8-meter telescopes. The Frederick C. Gillett Gemini Telescope is located at Mauna Kea, Hawai'i (Gemini North) and the other telescope at Cerro Pachón in northern Chile (Gemini South), and hence provide full coverage of both hemispheres of the sky. Both telescopes incorporate new technologies that allow large, relatively thin mirrors under active control to collect and focus both optical and infrared radiation from space. 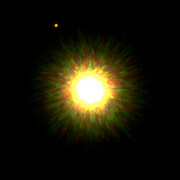