A Planet-like Companion Growing up in the Fast Lane

The cliché that youth grow up so fast is about to take on a new twist. This is due to the discovery of a very young planet-like object (with a mass somewhere between 5-10 times that of Jupiter), paired with a low-mass brown dwarf. What is unique about this system is that the planet-like body appears to have formed in about a million years–more rapidly than some theories of planet formation predict.

Kamen Todorov of Pennsylvania State University and co-investigators made the discovery using the keen visible-light eyesight of the Hubble Space Telescope combined with high-resolution adaptive optics infrared images from the Gemini Observatory. The images of the pair were obtained as part of a survey of 32 young brown dwarfs in the Taurus star-forming region located some 450 light years away. The team’s paper is in press for an upcoming issue of the Astrophysical Journal Letters, http://iopscience.iop.org/2041-8205/714/1/L84.

However, it’s the age of the smaller object that is most compelling. According to team-member Kevin Luhman of the Center for Exoplanets and Habitable Worlds at Pennsylvania State University, “This is the youngest planetary-mass companion that has been found so far, and its extreme youth provides constraints on how it could have formed. The formation mechanism of this companion in turn can tell us whether it is truly a planet.”

While different processes or combinations may be relevant for each system, here are three possible scenarios for the formation of planetary-mass companions: 1) Dust in a circumstellar disk slowly agglomerates to form a rocky planet 10 times larger than the Earth, which then accumulates a large gaseous envelope; 2) the disk is unstable causing a clump of gas to quickly collapse and form an object the size of a gas-giant planet; or, 3) rather than forming in a disk, a companion forms from the collapse of the vast cloud of gas and dust in the same manner and at the same time as the primary body.

If the last scenario does occur, then this discovery demonstrates that nature can make planetary-mass bodies through the same mechanism that builds stars. This is the likely solution because the planet-like companion is too young to have formed by the first scenario, which is very slow. The second mechanism occurs rapidly, but any disk around this low-mass brown dwarf probably did not contain enough material to make an object with a mass of 5-10 Jupiter masses.

“The most interesting implication of this result is that it shows that the process that makes binary stars extends all the way down to planetary masses. So it appears that nature is able to make planetary-mass companions through two very different mechanisms,” says Luhman. If 2M044144’s companion formed through cloud collapse and fragmentation, as stellar binary systems do, then the companion is not a planet by the definition that planets build up inside disks.

Brown dwarfs are typically tens of times the mass of Jupiter, and they are too small to sustain nuclear fusion and shine as stars do. Low mass objects like these glow primarily due to internal heating from the collapsing material, and they are warmer when very young, as in the case of the 2M044144 system.

Additional evidence to indicate that the new planetary-mass companion formed like a binary star comes from the presence of a nearby small red star that is gravitationally connected to the pair. When the Gemini observations were made, the adaptive optics system used the distant red star as a reference guide star (see background below). In the process, Gemini discovered yet another brown dwarf very close to the distant red star, making 2M044144 a possible member of a quadruple system. Luhman believes that all four objects may have formed in the same cloud collapse: “The configuration closely resembles quadruple star systems, suggesting that all of its components formed like stars,” Luhman said. 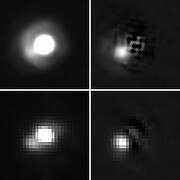 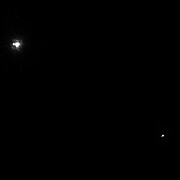