The Many Colors of Star Birth

A dramatic new image from the Gemini North telescope illustrates the dynamic and sometimes violent process of star birth. It also demonstrates the capabilities of new filters available to researchers using the Gemini Multi-Object Spectrograph (GMOS).

Known as Sharpless 2-106 (Sh2-106), the hourglass-shaped (bipolar) nebula in the new Gemini image is a stellar nursery made up of glowing gas and light-scattering dust. The material shrouds a natal high-mass star thought to be mostly responsible for the hourglass shape of the nebula due to high-speed winds (more than 200 kilometers/second) which eject material from the forming star deep within (see the recent Gemini press release on the birth of a massive star which exhibits evidence of similar processes). Research also indicates that many sub-stellar objects are forming within the cloud and may someday result in a cluster of 50 to 150 stars in this region.

The nebula is located about 2,000 light-years away in the direction of the constellation Cygnus. Its physical dimensions are about 2 light-years long by 1/2 light-year across. It is thought that its central star could be up to 15 times the mass of our Sun. The star’s formation likely began no more than 100,000 years ago and eventually its light will break free of the enveloping cloud as it begins the relatively short life of a massive star.

The new filters provide valuable insights by transmitting very specific colors of visible light emitted by excited hydrogen, helium, oxygen, and sulfur as radiation from hot young birthing stars energize clouds of gas and dust. The filters are also used to study planetary nebulae and excited gas in other galaxies.

For this image four colors were combined as follows: Violet – helium II filter; Blue – sulfur II filter; Green – oxygen III filter; and Red – hydrogen-alpha filter. Each filter was integrated for a total of 900 seconds. The seeing was 0.4 arcsecond RMS. The rotation of the image is 125º CCW from north up, east to the left and the field of view is 3.87 arcminutes on each side. The original calibrated, science-grade data for this image is available to the astronomical community on the Gemini Science Archive.

The image was obtained using the Gemini Multi-Object Spectrograph on the Gemini North telescope. An identical instrument and filter set is available at the Gemini South telescope in Chile for parallel capabilities on the southern sky. Filters on GMOS (described and characterized for Gemini users). 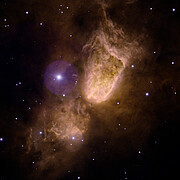 PR Image gemini1004b
The Many Colors of Star Birth