Astronomers Say Alien Dust Is Nothing To Sneeze At

Using the Gemini South telescope in Chile, astronomers at UCLA have found dusty evidence for the formation of young, rocky planets around a star some 500 light years distant. But these potential extrasolar worlds are alien in an even more intriguing way… In the aftermath of collisions between planetary embryos around this star the researchers discovered that the dusty debris bears no resemblance to the planetary building blocks of our own Solar System.

"Until now, warm dust found around other stars has been very similar in composition to asteroidal or cometary material in our Solar System,” said Dr. Carl Melis, who led the research while a graduate student at UCLA. “This newly discovered dusty star is a compelling exception.” Melis reported these findings today at the 215th American Astronomical Society meeting in Washington, DC.

The star, known as HD 131488, appears to be surrounded by warm dust in a region called the terrestrial planet zone, where the star heats the dust to temperatures similar to those found on Earth. "What makes HD 131488 truly unique is the unidentified dust species released from the colliding bodies as well as the presence of cold dust far away from the star,” said UCLA professor of physics and astronomy Dr. Benjamin Zuckerman, who is a co-author of the research which is pending publication. “These two characteristics make HD 131488 unlike any other star with evidence for massive quantities of dust in its terrestrial planet zone."

Infrared imaging and spectroscopy of the HD 131488 system using an instrument called T-ReCS on the Gemini South telescope in Chile provided the data used by the team in analyzing the warm inner dust. "Typically, dust debris around other stars, or our own Sun, is of the olivine, pyroxene, or silica variety, minerals commonly found on Earth," said Melis. “The material orbiting HD 131488 is not one of these dust types. We have yet to identify what species it is - it really appears to be a completely alien type of dust.”

The amount of cold and warm dust around HD 131488 is comparable to the amount of cool material seen around other dusty main sequence stars (the majority of a star's life where it is stable like our Sun is spent on the main-sequence). Melis and his team argue that the most plausible explanation for the unusually large quantity of warm dust is a recent collision of two rocky planetary mass bodies. Such a collision would provide an appropriate source of dust particles that are needed to explain the observations.

"The hot dust almost certainly came from a recent catastrophic collision between two large rocky bodies in HD 131488's inner planetary system," Melis said. "The cooler dust, however, is unlikely to have been produced in a catastrophic collision and is probably left over from planet formation that took place farther away from HD 131488."

"Although dusty telltales of planetary formation processes in the outer regions surrounding young stars have often been seen with infrared-sensitive space telescopes, for some reason stars that have large amounts of orbiting warm dust do not also show evidence for the presence of cold dust. HD 131488 dramatically breaks this pattern," said Zuckerman.

HD 131488 joins five other stars with masses a few times larger than the Sun and with evidence of dust in their terrestrial planet zone. According to Melis, "Of the thousands of intermediate mass stars that could have been detected with such large quantities of terrestrial planet zone dust, only these five were. Interestingly, all five of these stars have ages in the range of 10-30 million years. This finding indicates that the epoch of final catastrophic mass accretion for terrestrial planets, the likes of which could have resulted in the formation of the Earth-Moon system in our own Solar System, occurs in this narrow age range for stars somewhat more massive than the Sun." Similar statistics for stars of solar mass are not yet available for comparison.

The team will continue to study HD 131488 to try and uncover the nature of its strange dust composition and search for additional stars with evidence for rocky planet formation.

HD 131488 is located in the direction of the constellation Centaurus and is three times more massive and 33 times more luminous than our own Sun. The star is part of a major southern hemisphere star forming region known as the Upper-Centaurus-Lupus association whose members are believed to be about 10 million years old. By contrast, the Sun and Earth are about 4.6 billion years old.

These results are based on infrared observations made with the Gemini South telescope, the Infrared Astronomical Satellite (IRAS) space-based infrared observatory (which made the original observations that eventually let to the team’s discovery of infrared excess around HD 131488), the NASA Infrared Telescope Facility (IRTF), and the Keck II telescope and optical observations from the Keck I telescope, the Siding Spring Observatory (SSO) 2.3-meter telescope, and the Tycho space-based imager/astrometer that flew aboard the ESA Hipparcos mission. 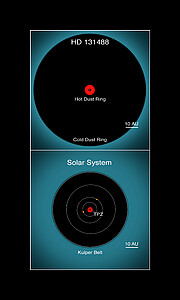