The infrared image, revealed at the 215th American Astronomical Society meeting in Washington DC, is a high-resolution view of the complex tendrils and puffs of glowing gas and dust surrounding the violent and convulsive death of an exceptionally massive, short-lived star.

The compelling modern history of Eta Carinae began in April 1843 when the system underwent a huge 20-year outburst that, throughout some of that period, made it the sky’s second brightest stellar object. During the “Great Eruption” astronomers estimate that about 20 times the mass of our Sun was ejected into interstellar space. Today, astronomers study this relatively nearby stellar oddity to help understand the late evolution of massive stars – a messy process involving outflows, eruptions, strong magnetic fields and powerful jets. The result of this activity is reflected in the new Gemini image presented by John Martin of the University of Illinois Springfield who, along with an international team of researchers, obtained their data using the Near-Infrared Coronagraphic Imager (NICI) at the Gemini South telescope in Chile.

Martin’s team used NICI to study gas and dust features surrounding the central star where the complex structure includes an intricate network of wispy clouds, inspiring the “Butterfly Nebula” moniker. The data also uncover a feature never directly imaged before called the Little Homunculus Nebula. “The Homunculus is an evolving corpse of a dying star and most of what we see is the visible outer layer, like a skin, from the Great Eruption. The Little Homunculus is under that skin,” said Martin. “The Gemini images have allowed us to perform something akin to an autopsy by peeling away the obscuring, outer dusty skin and giving us a glimpse of what’s inside. In the process we're finding things we have never imaged before and didn't expect. It’s like finding your murder victim has a third lung, an extra liver, or something more exotic hidden away under their skin!” Martin and his team hope that these observations will soon trace the uncertain history of a minor eruption in the Eta Carinae system in the late 1890s. The research team also includes Etienne Artigau (University of Montréal, Canada, lead author on subsequent paper and previously at Gemini South), Kris Davidson (University of Minnesota), Roberta Humphreys (University of Minnesota), Olivier Chesneau (FIZEAU, France), and Nathan Smith (University of California).

Eta Carinae, located only about 7,500-8,000 light years away, consists of at least two stars at its core, the largest of which is among the most luminous and massive stars in our galaxy having a mass of at least 100 times that of our sun. The stellar component is visible to the naked eye from the southern hemisphere and very low northern latitudes. Because of the complexity and advanced age of this stellar system, Eta Carinae has displayed consistently odd behavior and its brightness has varied greatly over the centuries. During its massive explosion (that lasted from 1843 through the 1850’s) it gave off as much light energy as a typical supernova but somehow survived the normally annihilating event. What we see as the Homunculus Nebula are the remains of that explosion–sometimes called the supernova imposter event. The gasses expelled from this explosion are hurtling outward at up to 2 million kilometers per hour and are comprised of a mixture of diverse elements (from nitrogen to iron) formed by the massive star.

NICI, the Gemini South instrument used to obtain the data for this result, incorporates a built-in curvature-sensing adaptive optics system and is optimized for the detection of faint, sub-stellar companions. It images over a field of about 18 arcseconds from 1 – 5 microns. In addition to images like the one featured in this release, NICI is currently being utilized in an aggressive planet-finding campaign targeting about 300 nearby stars for possible planetary companions. 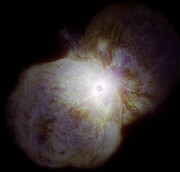