While far from a tropical rain forest, the equatorial region of Saturn’s largest moon, Titan, has recently displayed tantalizing evidence that the parched, dry, ultra-frigid desert can support large-scale storms.

The research, published in the August 13, 2009 issue of the journal Nature, announces the discovery of significant cloud formation (about three million square kilometers) within the moon’s tropical zone near its equator. Prior to this event (in April 2008) it was not known whether significant cloud formation was possible in Titan’s tropical regions. This activity in Titan’s tropics and mid-latitudes also seems to have triggered subsequent cloud development at the moon’s south pole where it was considered improbable due to the Sun’s seasonal angle relative to Titan.

The evidence comes from a team of US astronomers using the Gemini North telescope and NASA’sInfrared Telescope Facility (IRTF) both on Hawaii’s Mauna Kea. “We obtain frequent observations withIRTF giving us a ‘weather report’ of sorts for Titan. When the IRTF observations indicate thatcloud activity has increased, we are able to trigger the next night on the Gemini telescope todetermine where on Titan the clouds are located,” said team member Emily Schaller of the Universityof Hawai‘i (when this work was conducted). In fact, in the past eight years of monitoring at Gemini no significant clouds overTitan’s tropical regions were spotted.

Titan, the solar system’s second largest moon, has received considerable attention by scientists since NASA’s Cassini mission deployed the Huygens probe that descended through the moon’s atmosphere in January 2005. During its descent, the probe’s cameras revealed small-scale channels and what appear to be stream beds in the equatorial regions that seemed to contradict atmospheric models predicting extremely dry desert-like conditions near the equator. Until now these erosional (fluvial) features have been explained by the possibility of liquid methane seeping out of the ground.

"In April 2008 we observed what was a global event that shows how storm activity in one region cantrigger clouds, and probably rainfall, over arid regions, such as the tropics where Huygens landed,"said team member Henry Roe from Lowell Observatory. Roe adds, "Of course these rain showers are notliquid water like here on Earth, but are instead made of liquid methane. Just like the streambedsand channels that are carved by liquid water on Earth, we see features on Titan that have beencreated by flowing liquid methane."

Unlike the Earth, on Titan, where the temperature is some -178 degrees Celsius, methane (or naturalgas) is a liquid and it is the dominant driver of the moon’s weather and surface erosion. Any water on Titan is frozen on or below the moon’s frigid surface and resemble rocks or boulders on Titan's surface.

Mid-latitude and polar cloud formations have been observed for many years (by this team and others)but the combination of extensive monitoring at the IRTF with rapid follow-up using Gemini allowedthe team to capture the process as it unfolded near the equator. The team monitored Titan on 138nights over 2.2 years and during that time cloud cover was well under one percent. Then, mid-Aprilof 2008, just after team member and Ph.D. candidate Schaller had handed in her doctoral dissertationfocusing on Titan’s minimal cloud cover she noticed the dramatic increase in cloud cover.

During this three-week episode clouds forming at about 30 degrees south latitude were observed,followed several days later by clouds closer to the equator and at the moon’s south pole. Theapparent connection between the cloud formations leads to the possibility that cloud formation inone area of the moon can instigate clouds in other areas by a process known as atmosphericteleconnections. This same phenomena occurs in the Earth’s atmosphere and is caused by what arecalled planetary Rossby waves which are well understood.

The high-resolution Gemini images of Titan were all obtained with adaptive optics technology whichuses a deformable mirror to remove distortions to light caused by the Earth’s atmosphere and produceimages showing remarkable detail in the tiny disk of the moon. “Without this technology thisdiscovery would be impossible from the surface of the Earth,” said Schaller.

Currently the Cassini spacecraft is orbiting Saturn but only flies by Titan once every 6 weeks orso. This makes continuous ground-based monitoring important for studying features like these withshorter periods on the order of 3-weeks–like this storm.

Note to editors: High-resolution images of Titan with cloud formations visible are available as wellas a spectacular new near-infrared adaptive optics image of Saturn and Titan all obtained with theGemini North telescope.

The Gemini Observatory is an international collaboration with two identical 8-meter telescopes. TheFrederick C. Gillett Gemini Telescope is located at Mauna Kea, Hawai'i (Gemini North) and the othertelescope at Cerro Pachón in central Chile (Gemini South), and hence provide full coverage of bothhemispheres of the sky. Both telescopes incorporate new technologies that allow large, relativelythin mirrors under active control to collect and focus both optical and infrared radiation fromspace. 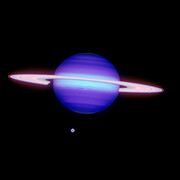 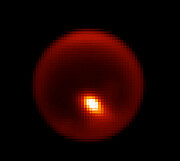