Jupiter is sporting a glowing bruise after getting unexpectedly whacked by a small solar system object, according to astronomers using the Gemini North telescope on Mauna Kea in Hawai'i. A spectacular new mid-infrared image is available for download on this page.

The new feature on Jupiter was first seen by Australian amateur astronomer Anthony Wesley on July 19th. The object that caused the impact scar could have been a small comet or asteroid. Using the SL9 impacts as a guide, the impacting object was probably just a few hundreds of meters in diameter. Such small bodies are nearly impossible to detect near or beyond Jupiter unless they reveal cometary activity, or, as in this case, make their presence known by impacting a giant planet. The impact site is dark in visible-wavelength images.

With the superb angular resolution of the Gemini observations, the data show the impact site in remarkable detail. "The structure of the impact site is eerily reminiscent of the larger Shoemaker-Levy 9 sites 15 years ago," remarked Heidi Hammel (Space Science Institute), who was part of the team that supported the effort at Gemini. In 1994, Hammel led the Hubble Space Telescope team that imaged Jupiter when it was pummeled by a shattered comet. "The morphology is suggestive of an arc-like structure in the feature's debris field," Hammel noted.

"We utilized the powerful mid-infrared capabilities of the Gemini telescope to record the impact's effect on Jupiter's upper atmosphere," said Imke de Pater (University of California, Berkeley). "At these wavelengths we receive thermal radiation (heat) from the planet's upper atmosphere. The impact site is clearly much warmer than its surroundings, as shown by our image taken at an infrared wavelength of 18 microns."

The Gemini images were obtained with the MICHELLE spectrograph/imager, yielding a series of images at 7 different mid-infrared wavelengths. Two of the images (8.7 and 9.7 microns) were combined into a color composite image by Travis Rector at the University of Alaska, Anchorage to create the final false-color image. By using the full set of Gemini images taken over a range of wavelengths from 8 to 18 microns, the team will be able to disentangle the effects of temperature, ammonia abundance, and upper atmospheric aerosol content. Comparing these Gemini observations with past and future images will permit the team to study the evolution of features as Jupiter's strong winds disperse them.

"The Gemini support staff made a heroic effort to get these data," said de Pater. "We were on the telescope observing within 24 hours of contacting the observatory." Because of the transient nature of this event, the telescope was scheduled as a "Target of Opportunity" and required staff to react quickly to the request. Tom Geballe and Chad Trujillo helped plan the observations, Rachel Mason programmed the observing plan for MICHELLE and the telescope, and Paul Hirst and Tony Matulonis performed the observations. Additional members of the team are Glenn Orton and Leigh Fletcher from the Jet Propulsion Laboratory. 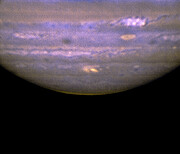