Supernova Remnants Dance in the LMC

The Gemini South Multi-Object Spectograph (GMOS) recently captured a dramatic image of a vast cloud complex named DEM L316 located in the Large Magellanic Cloud. The peanut-shaped nebula appears to be a single object, but the latest research indicates that it is really comprised of two distinct gas and dust clouds formed by different types of supernova explosions.

The new image reveals the intricate tendrils of gas and dust located in the remnants of the stellar explosions that created the still-expanding cloud complex. The object was first recognized in the early 1970s as a supernova remnant, a type of object that is enriched with elements created in stellar explosions. The nebula was likely created a few tens of thousands of years ago by more than one type of supernova exploding in this region of the Large Magellanic Cloud.

"The remarkable clarity of these Gemini-South observations shows the complex shock structure of these two supernova remnants in impressive detail," said Dr. Rosa Williams of Columbus State University, an astronomer who has studied DEM L316 extensively. "It's a great step forward in efforts to understand this fascinating pair of remnants - whether they represent only a chance alignment on the sky or some as-yet uncovered physical relationship."

Other recent observations of DEM L316 by the Chandra and XMM-Newton X-ray space telescopes have strengthened the idea that the cloud is actually two supernova remnants that are aligned in the sky by chance and not a single remnant with a distorted bi-polar shape. The Chandra observations reveal that the chemical compositions of the two shells are very different. This is a strong hint that they were created in very different types of supernova outbursts. The data show that the smaller shell (lower left in the GMOS image) contains significantly more iron than the larger one. The high abundance of iron in the small bubble indicates that the gas is the product of a Type Ia supernova. This type of explosion is triggered by the infall of matter from a star onto a white dwarf. Since white dwarf stars are extremely old objects, the system must have been a few billion years old when this supernova explosion took place.

By contrast, the larger, less iron-rich bubble is the result of a Type II supernova that was triggered by the collapse of a massive star (more than seven times the mass of our Sun) when it was only a few million years old. Since the two progenitor systems had vastly different ages when they “went supernova”, there is little chance they came from the same system. Therefore, while the detailed structure seen in the GMOS image makes it look like the two bubbles are colliding, they only seem to be close together in the sky because of a chance alignment in our line of sight.

The Large Magellanic Cloud is a sister satellite galaxy to our Milky Way and lies about 160,000 light-years away in the direction of the constellation Dorado. The DEM L316 nebula is located within the LMC and its two bubbles extend over a distance of about 140 light-years (roughly 35 times larger than the distance between our Sun and its nearest stellar neighbor).

The spectacular x-ray images of DEM L316 obtained with Chandra can be viewed at: http://chandra.harvard.edu/photo/2005/d316/

DEM L316 was also imaged as part of The Magellanic Cloud Emission Line Survey (MCELS)survey. Wide-field images of the target and its surroundings in the LMC are available here and here.

Rosa Williams of Columbus State University and You-Hua Chu of the University of Illinois published an extensive study of the double supernova remnant in the Astrophysical Journal (ApJ, 635, 1077, 2005). In that paper the authors also review previous work on this target. 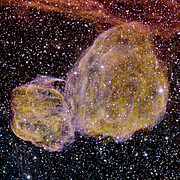 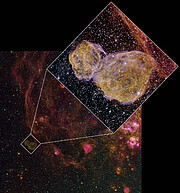