Astronomers have found evidence for the formation of young rocky planets around the star HD 23514 located in the well-known Pleiades (Seven Sisters) star cluster that is easily visible in the current evening sky.

Using an infrared sensitive camera (MICHELLE) on the Gemini North Telescope, Joseph Rhee of UCLA and his collaborators have measured heat from hot dust surrounding a 100 million year old star in the bright star cluster. The star has properties very much like our Sun except that it is 45 times younger and is orbited by hundreds of thousands of times more dust than our Sun. The star is also one of the very few solar-type stars known to be orbited by warm dust particles.

These warm emissions betray catastrophic collisions in an evolving young planetary system around an adolescent-age solar type star. The emission appears to originate from dust located in the terrestrial planet zone between about 1/4 to two astronomical units (AUs) from the parent star HD 23514, a region corresponding to the orbits of Mercury and Mars in our solar system.

Rhee and team members Inseok Song of the Spitzer Science Center and Benjamin Zuckerman of UCLA interpret the presence of so much hot dust as a result of colliding planetary embryos leading to the conclusion that a recent collision occurred between relatively large rocky bodies. According to Zuckerman, this is thought to be similar to the encounter that produced the Earth-Moon system more than four billions ago. "Indeed, the collision that generated the Moon sent a comparable mass of debris into interplanetary orbits as is now observed in HD 23514," said Zuckerman.

The astronomers analyzing the emission from countless microscopic dust particles propose that the most likely explanation is they were pulverized in the violent collision of planets or “planetary embryos.” Song calls the dust particles the “building blocks of planets,” which accumulate into comets and small asteroid-size bodies, and then clump together to form planetary embryos, and finally full-fledged planets. “In the process of creating rocky, terrestrial planets, some objects collide and grow into planets, while others shatter into dust; we are seeing that dust,” Song said.

These new observations indicate that rocky terrestrial planets, perhaps like the Earth, Mars or Venus, appear to be forming or to have recently formed. “This is the first clear evidence for planet formation in the Pleiades, and the results we are presenting strongly suggest that terrestrial planets like those in our solar system are quite common,” said Joseph Rhee, UCLA postdoctoral scholar in astronomy, and lead author of the research.

Astronomers report the findings in an upcoming issue of the Astrophysical Journal, published by the American Astronomical Society.

The Pleiades star cluster, in the constellation of Taurus, is easily visible to the naked eye at this time of the year. The cluster is well-known in many cultures, and is cited in the Bible, noted Rhee: “Can you bind the beautiful Pleiades? Can you loose the cords of Orion?” ( Job 38:31).

Although referred to as the seven sisters, “the cluster actually contains some 1,400 stars,” said Inseok Song, a staff scientist at Caltech’s Spitzer Science Center, former astronomer with the Gemini Observatory, and a co-author of the research. Located about 400 light years away, the Pleiades is one of the closest star clusters to Earth. 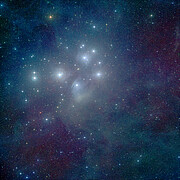 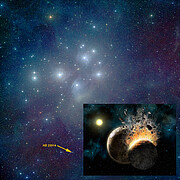