Charon: An Ice Machine in the Ultimate Deep Freeze

Frigid geysers spewing material up through cracks in the crust of Pluto’s companion Charon and recoating parts of its surface in ice crystals could be making this distant world into the equivalent of an outer solar system ice machine.

Evidence for these ice deposits comes from high-resolution spectra obtained using the Gemini Observatory’s Adaptive Optics system, ALTAIR coupled with the near-infrared instrument NIRI. The observations, made with the Frederick C. Gillett Gemini North telescope on Hawaii’s Mauna Kea, show the fingerprints of ammonia hydrates and water crystals spread in patches across Charon, and have been described as the best evidence yet for the existence of these compounds on worlds such as Charon. The observations suggest that liquid water mixed with ammonia from deep within Charon is pushing out to the ultra-cold surface. This action could be occurring on timescales as short as a few hours or days, and at levels that would recoat Charon to a depth of one millimeter every 100,000 years. This discovery could have profound implications for other similar-type worlds in the Kuiper Belt, which is the region of the solar system that extends out beyond the orbit of Neptune and contains a number of small bodies, the largest of which include Pluto and Charon.

“There are a number of mechanisms that could explain the presence of crystalline water ice on the surface of Charon,” said Jason Cook, the PhD student at Arizona State University who led the team of planetary scientists studying the surface of Charon. “Our spectra point consistently to cryovolcanism, which brings liquid water to the surface, where it freezes into ice crystals. That implies that Charon’s interior possesses liquid water.”

To reach this conclusion, Cook and his collaborators studied a number of other mechanisms that could explain the presence of water ice crystals on Charon. The crystals are not likely to be “primordial ice” made at the time the solar system formed because such ice would become amorphous (that is, it would lose its crystalline appearance) in a few tens of thousands of years, due to solar ultraviolet radiation and cosmic ray bombardment. Processes that create fresh, icy patches on other worlds, such as impact “gardening” by meteorites and convection of subsurface materials to the surface, are not supported by the chemical fingerprints of the water and ammonia hydrates on Charon’s surface. The only mechanism that explained the data was cryovolcanism, the eruption of liquids and gases in an ultra-cold environment.

The key to understanding cryovolcanism on Charon, according to Cook, is to look at Charon’s physical makeup. “Charon’s surface is almost entirely water ice,” he said. “So it must have a vast amount of water under the surface, and much of that should be frozen as well. Only deep inside Charon could water be a liquid. Yet, there is fresh ice on the surface, meaning that some liquid water must somehow reach the surface. The ammonia sitting on the surface provides the clue. It’s the ammonia that helps keep some material liquid. It makes it all feasible. Without ammonia the water could not get out there.”

Cryovolcanism in the outer solar system is a fairly common occurrence. Enceladus (a moon of Saturn) and Europa (orbiting Jupiter) both show evidence of water ice oozing or spewing out from beneath the surfaces. So-called “tiger stripes” on Enceladus were first reported in 2006 by planetary scientist Carolyn Porco of the Space Science Institute in Boulder, Colorado. They may be created by geysers that send water ice out through surface cracks. Markings seen on the Uranian moon Ariel in Voyager 2 fly-by images also suggest active cryovolcanism of some kind. Enceladus and Europa are tidally squeezed by the gravitational forces of their giant planets and in some cases by large nearby moons. This forces water out through cracks. Ariel may have been affected by tidal squeezing in the past. By contrast, Kuiper Belt Objects (KBOs) such as Charon, Quaoar, Orcus, and others are not tidally squeezed. Yet, they seem to show evidence of cryovolcanism.

In the case of Charon, it is thought that heat from internal radioactivity creates a pool of melted water mixed with ammonia inside the ice shell. “As some of the subsurface water cools and approaches the freezing point, it expands into the cracks in the ice shell above it,” said Cook. “Due to the expansion, even a small vertical crack of a half a kilometer at the base of the ice shell will allow material to propagate to the outer surface of Charon in a matter of hours, making that the conduit for the water.”

As the water sprays out through the crack, it freezes and immediately “snows” back down to the surface, creating bright ice patches that can be distinguished in near-infrared light. “I half expect that if we ever get to actually SEE a plume going off on Charon, we’d be seeing the process that makes tiger stripes similar to what we see on Enceladus and other frozen worlds,” Cook said. “The real proof will come from the deep-space NASA probe New Horizons, which will arrive at this system in 2015 and send back images that can verify what we’ve seen in our Gemini results.”

The team’s intent was to find evidence of methane, carbon dioxide, ammonia, and a form of ammonia called ammonia hydrate on the surface of Charon, which has also been reported on Quaoar and suspected on at least one other KBO. According to Assistant Professor Steven Desch, Cook’s colleague and thesis advisor at Arizona State University, ammonia hydrates help keep liquid water from freezing solid, making it easier for water to escape from the inside before it turns to ice. “It is literally an antifreeze,” he said, “and like the antifreeze we’re familiar with here on Earth, it depresses the melting point of water.”

Cook and his colleagues concentrated their observations on Charon’s anti-Pluto and sub-Pluto hemispheres, where patches of water ice exist at temperatures between 40-50 Kelvin (-387 to -369 F). They used NIRI to observe at 2.21 and 1.65 microns, wavelengths that reveal the presence of ammonia hydrates and water ice, respectively.

Prior to this work, all observations of Charon made by Cook and others showed crystalline water ice on its surface. Cook’s finding is the only one to date to take two hemispheres and try to estimate the temperatures from the spectra. He notes that more observations are needed to show how temperatures might change with rotation.

“We were using the rotation of Charon to see if these ices are distributed evenly across its surface or are found preferentially at certain longitudes,” Cook said. “Based on measurements from 2001, we knew the ices were there, but we didn¹t have precise locations. What we needed to do was to get high resolution, time-resolved spectra. NIRI coupled with ALTAIR was the best way to do that. And using an 8-meter telescope was a no-brainer. It all came together so well.”

According to Desch, the spectra obtained by Cook and the team are the best evidence yet for the existence of ammonia hydrates on KBOs. “It had been tentatively identified on Charon before by other groups,” he said, “but the lack of spectral resolution hindered its identification. This clinches it. These spectra are also better than those of other KBOs. I've talked to seasoned observers who are convinced for the first time that ammonia hydrates exist on KBOs.”

The next step is to get better spectra of other Kuiper Belt Objects such as Quaoar and Orcus. “Those larger than 500 kilometers across show us crystalline water ice,” Cook said. “But, there’s a whole set of intermediate-sized objects, between 200 and 500 kilometers across that we want to sample to test our ideas. As I think about these other KBOs, I want to look for the ammonia hydrate. I think it has to be out there.”

These results were published in the paper “Near-infrared Spectroscopy of Charon: Possible Evidence for Cryovolcanism on Kuiper Belt Objects” in volume 663 of the Astrophysical Journal, by Jason Cook while at Arizona State University, along with his graduate advisor Steven J. Desch (Arizona State University), the team also included Ted L. Roush (NASA Ames Research Center), and Chad Trujillo and Tom Geballe (Gemini Observatory). 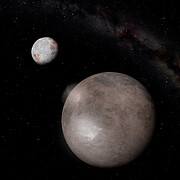