Discovery Narrows the Gap Between Planets and Brown Dwarfs

The coolest-known star-like object beyond the solar system is giving astronomers a new look at the differences between massive planets and the smallest brown dwarfs. This newly discovered object, called ULAS J0034-00 and located in the constellation Cetus, has a record-setting surface temperature of 600-700 K, cooler than any known solitary brown dwarf. In addition, it’s a relative lightweight, with an estimated mass of only 15-30 times that of Jupiter (although they both have about the same diameter).

The finding was announced today at the 210th American Astronomical Society meeting in Honolulu, Hawai’i, by an international team of astronomers that used the United Kingdom Infrared Telescope (UKIRT) and made followup observations with Gemini Observatory’s Near Infrared Spectrograph (GNIRS) on Gemini South. Their discovery suggests that even lower-mass objects could be found. If so, they would continue to shrink the boundary between high-mass planets and the smallest brown dwarfs.

J0034 was discovered in the very early stages of the UKIRT Infrared Deep Sky Survey (UKIDSS)—the world’s deepest-ever near-infrared sky survey—using an instrument called the Wide Field Camera (WFCAM). The brown dwarf is particularly remarkable since it has a lower temperature than any such object previously discovered. According to team leader Steve Warren of Imperial College London, “Only planets are cooler, and they are by definition bound to a parent star.’’

The discovery was initiated by post-doctoral researcher Daniel Mortlock, who first noticed the unusual object in the UKIRT survey images. ”Identifying an object like J0034-00 is a more challenging version of finding a needle in a haystack,” said Mortlock. “In this case it was like looking for a piece of slightly reddish straw rather than a nice shiny needle.”

Follow-up spectroscopic observations, critical for determining the brown dwarf’s temperature and likely mass were obtained with the Gemini South Telescope in Chile. “The infrared spectrum of J0034 confirmed that we had found a very cool brown dwarf,” said Dr. Sandy Leggett of Gemini Observatory. “However, it wasn’t until we made a detailed study of the water steam and methane features, and compared them to other brown dwarf spectra, that we realized we had the coolest dwarf ever seen.”

The final piece of the puzzle--precisely determining J0034’s distance accurately by using its apparent motion due to parallax as the Earth moves in its orbit–will have to wait for a year or so. However, astronomers expect to find that it is about 50 light-years away. This is closer to Earth than many of the stars that can be seen with the naked eye, and leaves open the exciting prospect of finding additional, even cooler objects lurking in our solar neighborhood.

According to Mortlock, finding the correct distance is important. "The model brown dwarf spectra, from which we make some of our inferences about the temperature and other properties of J0034, is probably 'incomplete', in the sense that not all the effects of the molecules in the brown dwarf's atmosphere are included fully," he said. "Thus, getting a completely independent distance measure (and hence an independent luminosity) is an important final check to make sure that J0034 has the size and temperature we think it does."

J0034 was discovered in the UKIDSS survey’s First Data Release (DR1), which covers only five per cent of the final survey area. Combined with the discovery of a number of hotter brown dwarfs in the same data, this implies that UKIDSS will likely discover even more exotic objects as it continues its census of the coolest stars in the solar neighborhood.

“Fully bridging the gap between stars and planets is one of the key aims of the UKIDSS survey, and it’s wonderful to see these aims starting to be fulfilled at such an early stage of the survey program,” said Dr. Andy Adamson, Associate Director of UKIRT.

UKIDSS is expected to be completed by 2012, by which time it will have covered almost a quarter of the sky and hopefully further explored the cool, low-mass objects that are defined somewhere between stars and planets.

The reason that brown dwarf ULAS J0034-00 is causing a stir is because there is a boundary between what is considered a brown dwarf and what a high-mass planet is. The characterization of this brown dwarf is an important step toward pinning down that threshold.

A brown dwarf is a small, faint, cool object (often called "failed" star) that, unlike the Sun and other stars, does not have sufficient mass to achieve hydrogen fusion in its core. With mostly slow gravitational contraction as an internal energy source, a brown dwarf gradually cools down as it radiates energy away into space over billions of years. Brown dwarfs exist in the mass range between about ten times that of Jupiter and one-twelfth the Sun’s mass (which marks the boundary between these dwarfs and hydrogen-burning stars). The low temperatures and small sizes of brown dwarfs combine to make them both very faint and red in color. Most of their radiation is in the infrared, and therefore is not detectable to both the human eye and conventional optical detectors. Detectors sensitive to longer infrared wavelengths, such as those used at UKIRT and Gemini, are capable of observing these objects in unique ways.

The spectrum of a brown dwarf is characterized by large wavelength regions from which almost no light is seen because it is being absorbed by water, methane and other molecules in the object’s atmosphere. The details of these absorption patterns depend sensitively on the star's temperature. A careful analysis of J0034's absorption spectrum (along with some further color data obtained from the Spitzer Space Telescope) is what revealed it to have such a low temperature (between 600 K and 700 K). 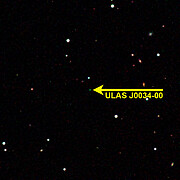