Astronomers have serendipitously discovered a record-breaking pair of low-mass objects with an extreme orbital separation. The petite objects, each of which has a mass less than 100 times that of Jupiter and could be either stars or brown dwarfs, are separated by more than 5,000 times the distance between the Sun and Earth – a value that breaks the previous record by a factor of three and leaves the duration of their future together uncertain.

The celestial duo is tethered by a weak gravitational link that results in an orbital dance so slow that it takes at least 500,000 years to complete a single revolution. Scaled down, this system would be like two baseballs orbiting each other about 300 kilometers (200 miles) apart.

The characterization of the system was made using near-infrared spectroscopic data taken with the Gemini South telescope, in conjunction with earlier discovery and confirmation observations made at the Cerro Tololo Inter-American Observatory 1.5-meter telescope operated by the Small and Moderate Aperture Research Telescope System (SMARTS) and archival data from the 2-Micron All-Sky Survey (2MASS) and ESO's Digitized Sky Survey (DSS). The result was published in the April 10, 2007, issue of the Astrophysical Journal Letters by lead author Étienne Artigau, a Science Fellow at Gemini Observatory, and a team that includes astronomers from the Université de Montréal, and the Canada-France-Hawaii Telescope.

The discovery came as a surprise because the only other known binaries that have similar or greater separations are significantly more massive systems. Since mass determines how strongly objects pull on each other, the more massive stars in the known systems have strong gravitational attractions. On the other hand, the stars in the newly discovered system have extremely low masses (thus low gravitational attraction). How these systems form and remain stable is a real mystery.

Equally intriguing is how the discovery came about. "The technique we used to make this discovery was born over a nice dinner and a couple of drinks," said Artigau, who first thought of it when he was a graduate student at the Université de Montréal. "The next morning, the technique didn't seem so crazy after all, and, in fact, it led to this discovery."

Artigau and his colleagues identified the two stars, which they nicknamed the “Hang-loose Binary,” in the southern constellation of Phoenix, in 2006. The actual catalog names are 2MASS J012655.49-502238.8 and 2MASS J012702.83-502321.1. The discovery was made by comparing their positions in the 2MASS point source catalog with those in the DSS. Since the 2MASS and DSS data were obtained 16 years apart, the stars' positions had moved significantly between the observations. The pair was then scrutinized by the Cerro Tololo 1.5-meter telescope to confirm that the two stars were indeed moving through space together.

To discern the nature of the new binary system, the researchers obtained the infrared "spectral fingerprint" of each member using the Gemini Near Infrared Spectrograph (GNIRS) on Gemini South. The data revealed that both stars are likely red dwarfs (M dwarfs) with temperatures of ~2200º Celsius (~4000º Fahrenheit) and probable ages of about a billion years.

Interestingly, the pair is seen juxtaposed against a group of stars called the Tucana/Horologium (TH) association, which presents the tantalizing possibility that the binary is part of this group. If true, then the stars would be significantly younger than the one-billion-year estimate and could be categorized as even less massive brown dwarfs.

The members of the TH association are a well-understood, loose grouping of 30-million-year-old stars that lie some 120 to 215 light-years away. The newly discovered binary pair has an estimated distance of 200 light-years, which seems to support the idea that the pair is part of the group. Furthermore, the newly found binary system appears to be keeping pace with the TH association as it moves through our galaxy.

"If the new binary system truly belongs to the TH association, and is not a chance alignment," said team member David Lafrenière, of the Université de Montréal, "then the objects are not 1-billion-year-old red dwarf stars, but are much younger brown dwarfs of the same age as the association. Unlike red dwarfs, these brown dwarfs wouldn't have enough mass to ignite hydrogen into helium at their cores, so they are destined to have their weak embrace disturbed more easily (and quickly) while they slowly cool, and fade from sight."

However, if they are not members of the TH association, these stars would likely be more-massive red dwarfs and could stay embraced for perhaps a billion years or more. To resolve their nature, observations are being proposed to use Gemini to look for lithium in the stars' atmospheres which will help better constrain their ages and masses. Until this is determined, the future of this celestial pair remains uncertain. 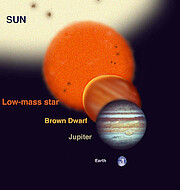