Like archaeologists unearthing a 'lost city,' astronomers using the 8-meter Gemini South telescope have revealed that the galaxy NGC 300 has a large, faint extended disk made of ancient stars, enlarging the known diameter of the galaxy by a factor of two or more.

The finding also implies that our own Milky Way Galaxy could be much larger than current textbooks say. Scientists will also need to explain the mystery of how galaxies like NGC 300 can form with stars so far from their centers.

The research, by an Australian and American team of scientists was just published in the August 10, 2005 issue of the Astrophysical Journal.

The team used the Gemini Multi-Object Spectrograph on the Gemini South telescope in Chile, and were able to clearly resolve extremely faint stars in the disk up to 47,000 light-years from the galaxy’s center—double the previously known radius of the disk. To detect these stars, images were obtained that went more than ten times ‘deeper’ than any previous images of this galaxy (Figure 1).

“A few billion years ago the outskirts of NGC 300 were brightly lit suburbs that would have shown up as clearly as its inner metropolis,” said the paper’s lead author, Professor Joss Bland-Hawthorn of the Anglo-Australian Observatory in Sydney, Australia. “But the suburbs have dimmed with time, and are now inhabited only by faint, old stars—stars that need large telescopes such as Gemini South to detect them.”

The finding has profound implications for our own galaxy since most current estimates put the size of our Milky Way at about 100,000 light-years or about the size now estimated for NGC 300. “However, the galaxy is much more massive and brighter than NGC 300 so on this basis, our galaxy is also probably much larger than we previously thought—perhaps as much as 200,000 light-years across,” said Bland-Hawthorn.

The Galaxy That Keeps On Keeping On!

Adding to these compelling findings is the fact that the team found no evidence for truncating, or an abrupt ‘cutting-off' of the star population as seen in many galaxies further from the central regions.

Team member Professor Bruce Draine of Princeton University explains: "It's hard to understand how such an extensive stellar disk that falls off so smoothly in density could have formed — this is really a huge surprise to us. Because it takes an incredibly long time to evenly disperse stars from a galaxy's central disk to these extreme distances, it seems more likely that we are seeing the results of star formation that took place long ago, perhaps as much as ten billion years ago."

“We now realize that there are distinctly different types of galaxy disks,” said team member Professor Ken Freeman of the Research School of Astronomy and Astrophysics at the Australian National University. “Probably most galaxies are truncated—the density of stars in the disk drops off sharply. But NGC 300 just seems to go on forever. The density of stars in the disk falls off very smoothly and gradually.”

“We now realize that there are distinctly different types of galaxy disks,” said team member Professor Ken Freeman of the Research School of Astronomy and Astrophysics at the Australian National University. “Probably most galaxies are truncated—the density of stars in the disk drops off sharply. But NGC 300 just seems to go on forever. The density of stars in the disk falls off very smoothly and gradually.”

NGC 300 is a spiral member of the Sculptor group of galaxies, the closest extragalactic cluster to us, and is about 6.1 million light-years away. Most of its stars lie in a fairly flat disk making it appear to be a very normal spiral galaxy like our Milky Way. NGC 300 is the first galaxy outside of our Local Group to be studied to this depth. There have only been two others studied to such faint levels, the Andromeda galaxy and its neighbor M33, both in our Local Group (see adjacent background information box).

The researchers have been granted more time on Gemini South to determine exactly what kind of stars they are seeing in the outskirts of NGC 300, and to make similar studies of other galaxies.

“We still have a lot to learn about how galaxies like ours formed,” said Bland-Hawthorn. “Our next Gemini observations, that we have planned for later this year, should provide even more important clues and hopefully even more surprises!”

How to use Gemini Observatory's podcast with iTunes: 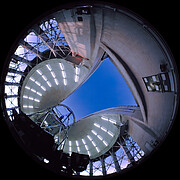 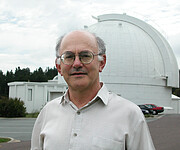 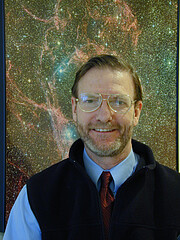 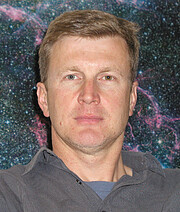