Gemini Observatory Shows That "10th Planet" Has a Pluto-Like Surface

Gemini Observatory has obtained a preliminary spectrum of 2003 UB313, the so-called "10th planet". These observations were obtained on January 25, 2005 by Chad Trujillo, a Gemini staff member who is also on the discovery team for 2003 UB313, the existence of which was formally announced by the Minor Planet Center in Cambridge, MA on July 29, 2005. The discovery team (Mike Brown of Caltech, Chad Trujillo of Gemini and David Rabinowitz of Yale) are still uncertain of the exact size of the body, but report that it must be Pluto-sized or larger. The body is the most distant solar system body known to orbit the sun at 97 AU from the sun, over 3 times farther away than planet Pluto. The "planet" was originally discovered in late December 2004 with data collected from the Samuel Oschin 1.2 meter telescope at Palomar Mountain, CA.

To better characterize the surface of the object the team obtained spectra with NIRI (the near-infrared spectrograph) on the much larger 8 meter Gemini North telescope on Mauna Kea, Hawaii. The NIRI spectra shows strong signatures of methane ice, remarkably similar to the spectrum of Pluto, which is also dominated by methane ice in near-infrared observations. Figure 2 shows the spectra of Pluto and 2003 UB313, with arrows marking the "dips" that correspond to methane features. The same features are readily apparent in both the Pluto and the 2003 UB313 spectra.

Trujillo states, "We still do not know much about this object, however, it is clear that it is very similar to Pluto in both size and composition, at least upon first glance." The presence of methane ice is unusual in that it indicates a primitive surface that has not likely been heated significantly since the solar system formed 4.5 billion years ago. "If 2003 UB313 ever got close to the sun, all the methane ice would have boiled off immediately," Trujillo continued. "To date, no one has seen methane on any other Kuiper Belt Object, only on Pluto and Neptune's moon Triton." The distant Kuiper Belt is a collection of bodies orbiting the sun beyond Neptune, and is likely the parent population to the comets.

The team have also obtained spectra of the smaller mini-planet 2003 EL61, which was reported on July 28, 2005 by two independent teams: one from the Sierra Nevada Observatory in Spain and the Brown, Trujillo and Rabinowitz team. This object is smaller than Pluto, but shows strong water-ice features, similar to what is seen on the surface of Pluto's moon Charon.

Results will be reported in detail at the 37th annual meeting of the Division for Planetary Sciences of the American Astronomical Society in September 2005 at the University of Cambridge, UK.

What in the World is a Planet Anyway?

With the recent discoveries of Sedna and now 2003 UB 313 at distances from the Sun well beyond those of the “traditional” planets that we all learned in elementary school, the question: “What is a planet?” has taken on added significance.

There is a diverse range of objects populating our solar system, and many objects are clearly not planets. These include: comets, asteroids (sometimes called minor planets), satellites, dust grains, charged particles, planetesimals and of course the sun. But what is it that makes a planet a planet?

Some have argued that Pluto does not fit the bill as a planet given its small size and highly eccentric, greatly inclined orbit.. However, it is countered that Pluto has a satellite like other planets, it orbits the sun like other planets and it is made up of planet-like material. Therefore, it is a planet. So where does that leave objects like 2003 UB 313?

Many of the same arguments that have been used to “demote” Pluto from planet status are also being used on 2003 UB 313 (as well as Sedna and similar objects), even though these arguments have not made much progress and often just cloud the issue with semantics.

The main differences between 2003 UB 313 and Pluto are: it is probably a bit bigger than Pluto, it is located in the Kuiper Belt about 3-times further from the sun than Pluto, and the inclination of its orbit is about 44° with respect to the plane of the solar system. (Note: 44° is a very high inclination, the second highest is of Pluto at 17°. One of the reasons UB 313 has not been discovered until now is because it was not believed that Kuiper Belt objects could have such a large inclination to the ecliptic.)

Given the fact that there is not a consensus on Pluto’s status, it is unlikely that there will ever be agreement on 2003 UB 313 or other objects like it. Suffice it to say that we are learning a lot more about our solar system and there will probably be more surprises as we explore to even greater depths. 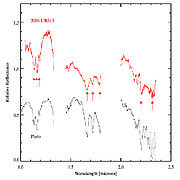 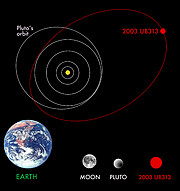 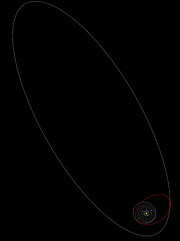