LGS lasers have a total power output that is less than a refrigerator light bulb; Laser Guide Stars on Mauna Kea can not be used for any military-related activities; LGS lasers produce an artificial star that is invisible to the naked eye; Atmospheric scattering of LGS light is only dimly visible within a few hundred feet of an observatory; LGS are formed in a 6 mile (10 kilometer) thick layer of sodium in the atmosphere about 50 miles (90 kilometers) above the Earth’s surface. The high-altitude sodium is delivered by meteors burning up in our atmosphere.

Laser guide stars (LGS) are a state-of-the-art technology that has been developed in response to the limitations of adaptive optics (AO) systems. An LGS is produced by a relatively low power laser beam that shines up from a telescope into a layer of sodium gas in our upper atmosphere. The result is a faint glow caused by the laser exciting the sodium atoms similar to the gas in a neon sign. From the ground this glow appears as a temporary artificial “star” that can be used by AO systems to sample and correct for distortions to starlight caused by turbulence in our atmosphere.

The laser is tuned to a wavelength of light that appears yellow/orange to the human eye. The total amount of energy it produces is about 10 to15 watts, or comparable to a bedside reading lamp. Because it is a laser, the light is concentrated in a relatively thin beam (about 18 inches (50cm) in diameter). The light appears brighter because it is concentrated in a beam compared with a light-bulb which emits light in all directions. The laser beam is not powerful enough to burn an object and passing your hand through it would not cause any harm however, like any laser, it would be dangerous to look directly into it.

From the ground, the laser’s light is visible as a faint column of light shining up from the top of the telescope. The beam is only visible because particles of dust in our atmosphere scatter a small portion of the light. Because Mauna Kea’s air is so clean, not much of the light is scattered and the beam is often difficult to see, especially if you are more than a few hundred feet from the observatory.

The temporary artificial star produced by the laser is formed about 50 miles (90 kilometers) above the surface of the Earth and is about 10th magnitude—not nearly bright enough to be seen with the naked eye. However, it could be spotted with a small telescope if you knew exactly where to look.

The observatories on Mauna Kea that use laser guide stars — Keck, Gemini, and soon Subaru — will monitor any possible aircraft or satellites that contain sensitive detectors that might be affected by the laser. In the unlikely event that they could pass through the beam, the laser would be turned off in advance. Both manual and automated systems are in place whenever the lasers are being used.

Laser guide star technology allows the observatories on Mauna Kea to study a much larger number of objects (and discoveries) than with AO than traditional natural guide stars allow. For more information on AO technology, see the Gemini Information Sheet: “Adaptive Optics”.

At about 50 miles above the Earth’s surface, the yellow/orange laser light encounters a layer of sodium in the upper atmosphere and the light causes the molecules of sodium to glow as seen from the side (left). From the perspective of the telescope, this glow appears as a relatively dim star, bright enough to provide a reference or guide star (right). This artificial guide star allows continuous assessment of how the atmosphere is distorting starlight passing through the column of air that the telescope is observing through. 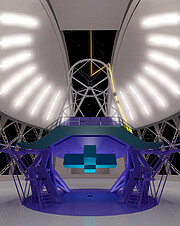 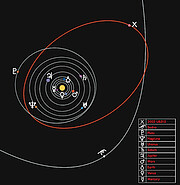