Gemini Observatory honored Dr. Fred Gillett, a pioneer in infrared astronomy, by naming the Gemini North Telescope in his honor at ceremonies at the telescope on Mauna Kea, Hawai'i, November 13, 2002.

Dr. Gillett, who died in April 2001, was one of the primary visionaries of the Gemini telescopes. He was instrumental in assuring that the ground-breaking design of Gemini's twin 8-meter telescopes would be a major scientific contribution to astronomy in the 21st Century.

"Fred was a true pioneer in infrared astronomy," said Dr. Wayne van Citters, Director of the Division of Astronomical Sciences at the National Science Foundation, who spoke at the ceremony. "Naming the Gemini telescope in honor of Fred is the most fitting tribute we can pay to him. He was instrumental in the realization of Gemini and multitudes of other projects throughout his career in the infrared."

Gemini Director Dr. Matt Mountain, who worked closely with Dr. Gillett for many years on Gemini said, "If there is one phrase that describes Fred it would be integrity of purpose, both in his life and in his science. Fred approached the problem of producing the world's most powerful infrared telescope with a single purpose. This is a key reason why Gemini performs so well today, and why the telescope will now be called The Frederick C. Gillett Gemini Telescope."

During an influential career spanning more than 40 years, Dr. Gillett was involved in almost every major development in infrared astronomy, from early infrared detectors to the innovative design and construction of Gemini Observatory. Dr. Gillett also played a key role in the discovery of the Vega Phenomenon, which refers to the dusty disk around the bright star Vega. This discovery, made in 1983, was the first observational confirmation that planets could exist around stars other than our Sun.

Although Gemini was his final project, Dr. Gillett had a long association with the National Optical Astronomical Observatory (NOAO) in Tucson, which he considered home. He was associated with the success of the Infrared Astronomy Satellite (IRAS), a milestone in the history of infrared astronomy. In the late 1980's he helped establish an infrared presence at NASA. His support and influence while at NASA also helped shape the vision of the SIRTF and SOFIA projects. In 1990, he chaired the Infrared Committee of the Decadal Survey sponsored by the National Academy of Sciences. The committee's findings helped influence the more than 300 scientists who participated in the survey to officially declare the 1990's as the "Decade of the Infrared."

"Our family is honored to have Fred recognized by his friends and colleagues this way," said Marian Gillett, the widow of Dr. Gillett, at the ceremony. "The naming of the telescope, which always looks up at the stars, just as Fred did all his life, is a very appropriate way to remember him."

Approximately 60 friends, associates, family members and others honored Dr. Gillett with a plaque dedication ceremony at the Gemini North telescope. Approximately 100 other members of the Gemini "family" participated via a live videoconference between Hilo, Tucson and Chile. The ceremony was followed by a reception and dinner in Dr. Gillett's memory at the Hilo Hawaiian Hotel in Hilo, Hawai'i. 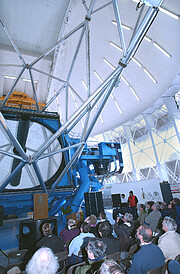