The first scientific observations from the Gemini North telescope provide a dramatic glimpse into the elusive core of the Milky Way, including an intriguing bow-shock from a star as it plows into a poorly understood gas cloud a mere 3 light-years from the galactic center.

Long-suspected of harboring a huge black hole, the center of the Milky Way is a beehive of activity, with hapless stars flung around the core at tremendous speeds.

"There has a been a buzz of increased interest by astronomers lately in looking at the properties of the core," says UCLA Astronomer Dr. Andrea Ghez, whose work over several years at the W.M. Keck Observatory is responsible for pinpointing the exact location of the central black hole. "With this excellent science-quality data, Gemini has demonstrated its many unique capabilities for studying our galaxy and beyond. It is a remarkable new tool in our toolbox for exploring the universe."

The vast extent and extreme clarity of the Gemini infrared images offer tantalizing hints that the center of our galaxy is home to even more exotic objects than once believed, at least one of which Gemini has revealed clearly for the very first time.

The object, known by the unglamorous name of IRS-8, was only an ill-defined smudge until Gemini came along. Now, the Gemini telescope's advanced optics show that IRS-8 appears to be a star that is plowing through a poorly understood gas and dust cloud near the galactic center. Moving relative to the cloud, the star creates a very obvious bow-shock wave, similar to the wave that forms in front of a boat as it goes through water.

This finding could alter our understanding of the center of our galaxy once astronomers determine how the star and gas cloud are moving relative to each other. By studying this interaction, the properties of the gas cloud and the conditions surrounding the star will be better understood and provide a valuable new tool for probing the intense conditions near the center of our galaxy.

The image released today represents only a fraction of the total data available to scientists from this study. "Never before have we seen such a large area of the galactic center this clearly," said Dr. François Rigaut of the Gemini Observatory who led the project. "The data is also being released to scientists world wide regardless of affiliation so that astronomers can make the most of this data as quickly as possible."

However, it will still take some time before astronomers will be able to dig out all of the treasures buried in this initial digital goldmine of data. "This is the first scientific data to be released to the astronomical community by the Gemini Observatory," says Director Dr. Matt Mountain, "and to be able to release such a spectacular image and data set shows the tremendous potential of these telescopes."

The data was taken at several infrared wavelengths and combined to create a "color" image. The remarkable sharpness of the image is due to a technology called adaptive optics that actually corrects for distortions to starlight caused by turbulence in the Earth's atmosphere (more details on adaptive optics). The adaptive optics instrument used is called Hokupa`a, on loan to Gemini from the University of Hawaii Institute for Astronomy, where it was built and funded through a grant by the National Science Foundation.

Observing the galactic center is especially difficult because its light must travel through thousands of light-years of gas and dust before we can see it from our perch in the galactic suburbs. Only a small portion of the light ever makes it to our planet and most of that is in the infrared (or heat) part of the spectrum. The Gemini Observatory has been designed to make the most of the trickle of infrared radiation from space by using sophisticated new technologies like adaptive optics and infrared optimization that capitalize on the ideal infrared conditions at Mauna Kea.

The data were obtained over several nights in July and August as part of a preliminary science testing period as the Gemini North telescope nears completion on Mauna Kea in Hawaii.

The Gemini 8-meter Observatory Project is a multi-national collaboration that will provide two nearly identical 8-meter telescopes to an international community of astronomers. Both telescopes will incorporate new technologies that allow large,relatively thin mirrors to collect and focus both optical and infrared radiation from space - at times with even more clarity than is possible with the Hubble Space Telescope. The telescopes are located on Hawaii's Mauna Kea (Gemini North) and on Cerro Pachón in central Chile (Gemini South), and hence will provide full sky coverage.Gemini North is nearing scientific operations early in the year 2001 and Gemini South will follow about six months later. More information on the Gemini Observatory can be found at www.gemini.edu. 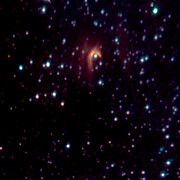