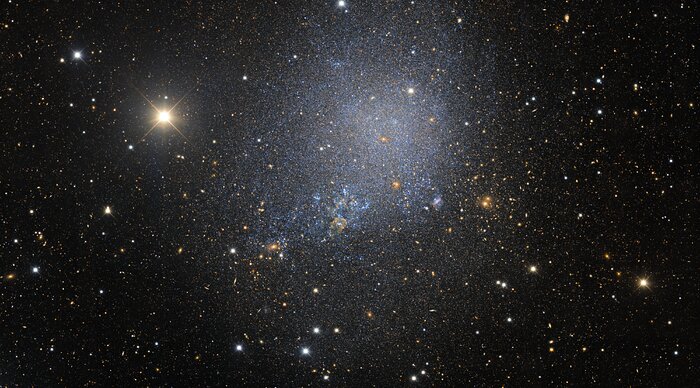 The irregular dwarf galaxy IC 1613 contains some 100 million stars and is a member of our Local Group of galaxies, which also includes our Milky Way, the Andromeda spiral galaxy, and the Magellanic Clouds. It is at a distance of 2.4 million light-years and contains several examples of Cepheid variable stars — key calibrators of the cosmic distance ladder. The bulk of its stars were formed about 7 billion years ago and it does not appear to be undergoing star formation at the present day, unlike other very active dwarf irregulars such as the Large and Small Magellanic clouds.

To the lower right of IC 1613, one may view a background galaxy cluster (several hundred times more distant than IC 1613) consisting of dozens of orange-yellow blobs, centered on a pair of giant cluster elliptical galaxies. To the left of the irregular galaxy is a bright, sixth magnitude, foreground, Milky Way star in the constellation of Cetus the Whale, identified here as a star by its sharp diffraction spikes radiating at 45-degree angles.

This image is an excerpt from the Dark Energy Survey, which has released a massive, public collection of astronomical data and calibrated images from six years of work. The Dark Energy Survey is a global collaboration that includes the Department of Energy's (DOE) Fermi National Accelerator Laboratory (Fermilab), the National Center for Supercomputing Applications (NCSA), and NSF’s NOIRLab. The image was taken with the Dark Energy Camera, fabricated by DOE, on the Víctor M. Blanco 4-meter Telescope.

The immensity and depth of the survey can be appreciated by diving into the zoomable version of this wider excerpt.