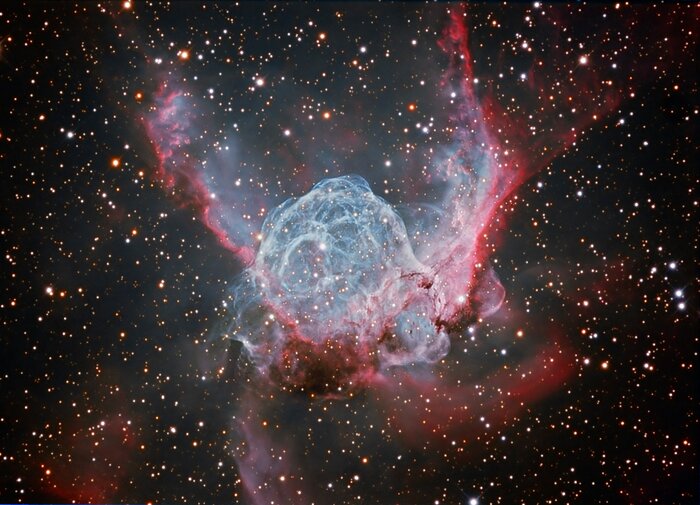 Thor’s Helmet in Canis Major is about 15,000 light years distant. A large bright star near the helmet’s center has created this interstellar bubble by the force of its “stellar wind”. However, this star, known as a Wolf-Rayet star, may go supernova in the relatively near astronomical future. In the meantime, we can continue to enjoy images of NGC 2359. This image was created by first assembling a simple RGB from the 2 hours/channel RGB data. The H-alpha data was layered over the red in Photoshop’s lighten mode; the same with the OIII data for the green and blue channels. This allowed us to create an image with RGB stars but enhanced nebula detail from the H-alpha and OIII data. Then a composite (H-alpha+OIII) layer was pasted over the (R+Ha)(G+OIII)(B+OIII) image. The opacity of the composite layer was reduced somewhat to allow the RGB stars to shine through. The star appearance was kept relatively subdued, so as not to detract from the nebula.