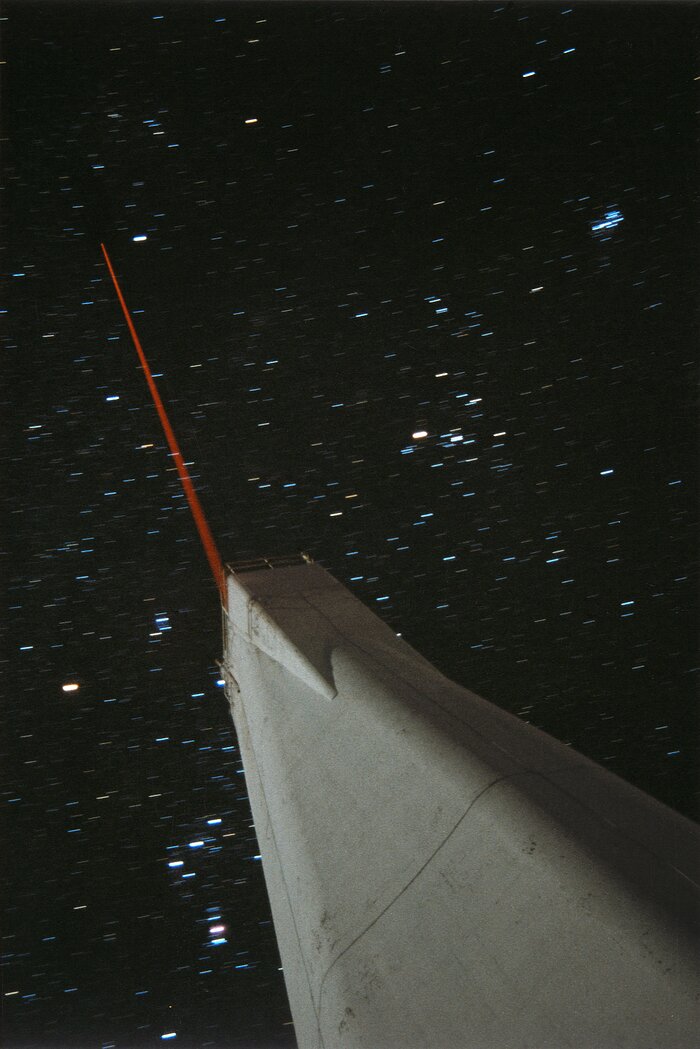 From the NOAO Newsletter for June 1998 (Number 54) Laser-Guide-Star at the Sacramento Peak Vacuum Tower Telescope The University of Chicago Adaptive Optics System (ChAOS) group has been developing its sodium laser-guide-star system at the Sac Peak solar Vacuum Tower Telescope (VTT), since the VTT provides a good optics laboratory environment combined with a good supply of nighttime observing time. ChAOS is a high-order laser-guide-star adaptive optics (AO) system built for the large ground-based astronomical telescopes. One of the critical techniques in the system is to generate an artificial star in the upper atmosphere for the AO system's wavefront sensor. Using a laser with wavelength tuned to the sodium D2 line shining upon the mesosphere at about 90 kilometers above sea level, a bright "sodium star" can be generated. The picture shows the laser-guide-star experiment at the NSO VTT. During the experiment, the artificial star, as bright as the 9th magnitude and as small as about the size of a natural star, was generated, and various factors that affect the quality of the artificial star were explored. The VTT was used to launch the laser beam to the mesosphere and observe the return light from the generated artificial star simultaneously. The photo was taken during the experiment on the night of 20 November 1997. In the photo, the VTT was lit up by moonlight and a 4-watt laser beam was launched from the top of the telescope. Some well-known constellations such as Orion and Taurus are also visible in the picture. Fang Shi, Ed Kibblewhite, Jacques Beckers

Credit:
Fang Shi/NSO/NOIRLab/NSF/AURA/
Usage of NOIRLab Images and Videos
Are you a journalist? Subscribe to the NOIRLab Media Newsletter.