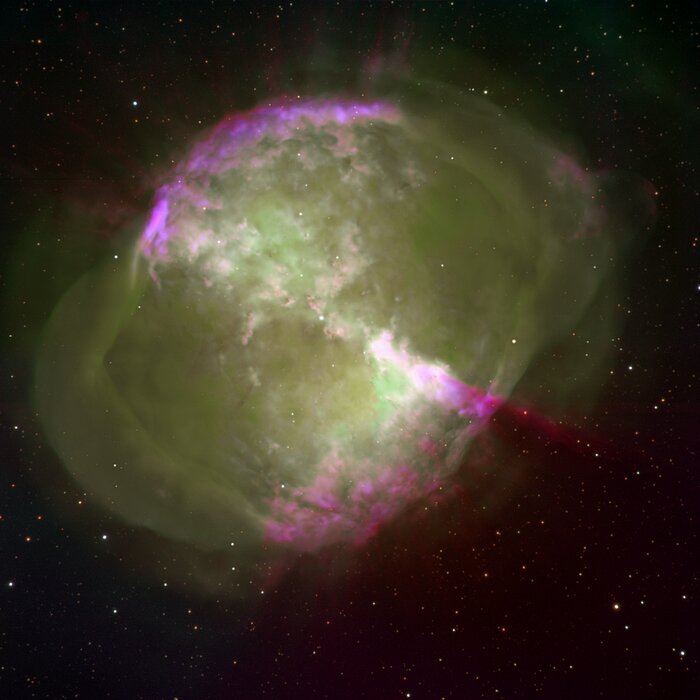 This excellent image of the Dumbbell Nebula (M27, NGC6853), a planetary nebula in the constellation of Vulpecula, was taken at the 3.5-meter WIYN telescope using the mini-mosaic imager (described in an NOAO newsletter article). The nebula was formed when an evolved, red giant star ejected its outer envelope near the end of its lifetime. The expanding cloud of gas becomes visible once the hot core of the star, visible near the center, is exposed and the high-energy, ultraviolet light from the core causes the cloud to fluoresce. As a result, the cloud emits light at discrete wavelengths resulting in an emission-line spectrum. The strongest of these lines at visible wavelengths are those of singly and doubly ionized Oxygen (372.7 nm, OII, and 500.7 nm, OIII, respectively) and Hydrogen (656.3 nm, H alpha). This color image was obtained by combining three separate pictures, each one taken through a narrow filter centered at these wavelengths, choosing red to be H alpha (30 minute exposure), green to be OIII (30 minutes) and blue to be OII (60 minutes). The combination produces an unusual, semi-realistic image of the Dumbbell Nebula (see also the more usual color image from the Mayall 4-meter telescope, the nice deep image from the 2.1-meter telescope, and another WIYN image including neutral Oxygen). The green regions indicate locations within the gas cloud where the highest energy radiation is absorbed and doubly ionized Oxygen is present. In contrast, regions that are predominantly blue and red indicate where lower energy radiation is being absorbed and the line from doubly ionized Oxygen is weaker compared with those of singly ionized Oxygen (blue) and Hydrogen (red). Since the hot central star emits the same spectrum in all directions, these differences are thought to originate from variations in the density of the expanding cloud. The Dumbbell nebula is about 850 light-years away from Earth and about 1.5 light-years in diameter (although both distance and size are very poorly constrained).