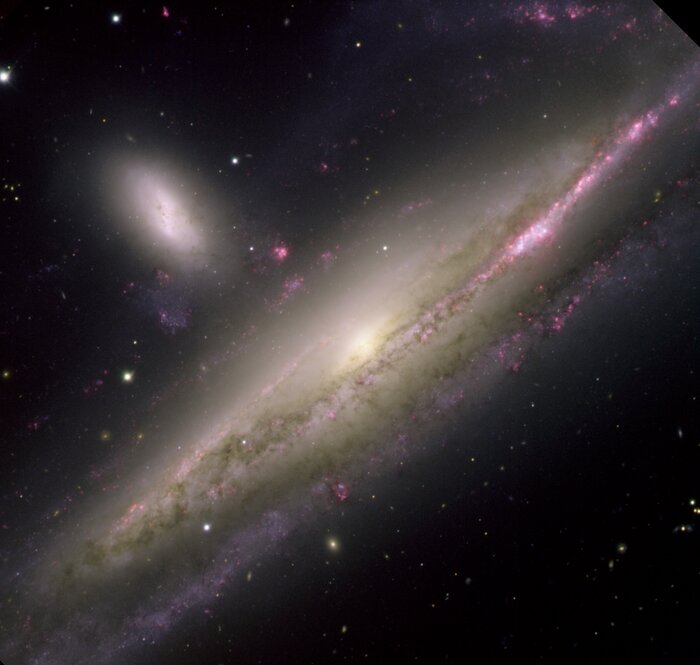 The interacting galaxy pair NGC1532 and NGC1531 were imaged using the Gemini Multi-Object Spectrograph (GMOS) at Gemini South in Chile on December 5, 2004. This view reveals spectacular details in the galactic pair embraced in a fiery waltz. The larger galaxy (NGC1532) is a spiral, and from our point of view within the Milky Way it is seen as nearly edge-on. Intense reddish star-forming regions spatter the edges of the dusty arms silhouetted in the foreground against the galactic disk. The three-dimensional nature of the galaxy is revealed by the background spiral arms dimmed by intervening gas and dust. The smaller of the galactic pair (NGC1531) is dwarfed by its larger companion in much the same fashion as the Large Magellanic Cloud is by our Milky Way. Hints of interaction between these two galaxies are seen in at least two stray associations of stars and glowing red clumps of hydrogen gas. A warp in a background spiral arm of NGC1532 and a possible bridge of matter that connect the pair suggest continued influences between the two galaxies. This pair is located about 55 million light-years away toward the southern constellation of Eridanus. It is part of a larger group that includes at least one other dwarf galaxy outside the field of this image. The mass of NGC1532 is estimated to be slightly greater than that of our Milky Way.