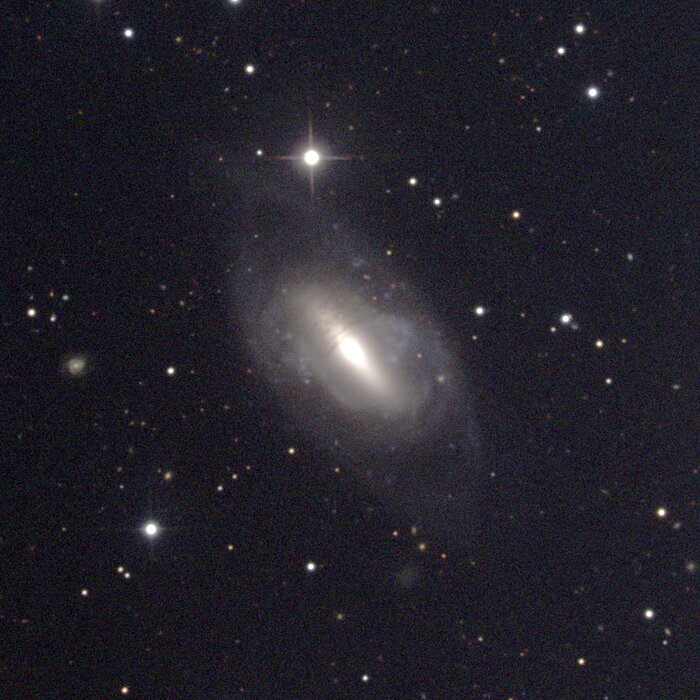 NGC2685 is an interesting polar ring galaxy in the constellation Ursa Major. It is also called the Helix Galaxy or the Pancake Galaxy. It has a set of unusual whorls, or helical filaments, surrounding the central spindle of a relatively normal S0 galaxy, and was called the most unusual galaxy in the Shapley-Ames catalogue. Sometimes classified as SB0(pec), NGC2685 is odd enough to appear as number 336 in Arp's Atlas of Peculiar Galaxies. Polar ring galaxies are dynamically peculiar, having a ring of gas, stars and dust orbiting in a plane almost perpendicular to the normal flat plane of the host galaxy, that is, they contain two separate velocity systems whose axes are perpendicular. The most popular view says that such galaxies are the result of an interaction, up to and including a complete merger with another galaxy. NGC2685 also shows weak emission lines in the optical, and none in the infrared, making it an atypical member of the class of active galaxies called LINERS. The present picture is a color composite of CCD images from the 0.9-meter telescope of the Kitt Peak National Observatory, near Tucson, Arizona, taken in November 1998. Image size 8.5 arc minutes.

Credit:
NOIRLab/AURA/NSF
Usage of NOIRLab Images and Videos
Are you a journalist? Subscribe to the NOIRLab Media Newsletter.