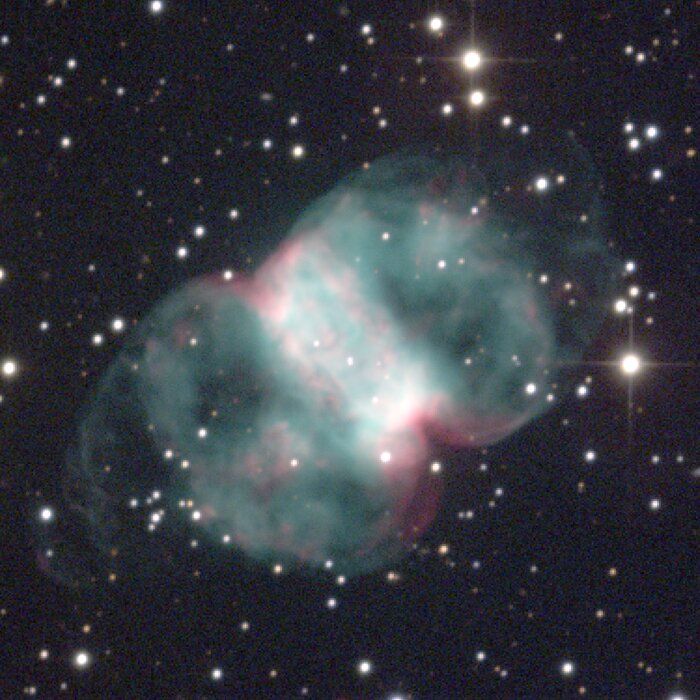 The planetary nebula M76 in the constellation Perseus has been known under several names, such as the Cork, Butterfly or Barbell Nebula, but is most often called the Little Dumbbell (see the Dumbbell itself). M76 was given two NGC numbers because Herschel believed it to be an unresolved double nebula. It is one of the faintest Messier objects, with an integrated visual magnitude fainter than 12 and generally low surface brightness. The sharp edges of the central rectangular portion contrast with the large wisp-like extensions appearing as two overlapping ellipses centered on the short axis of the rectangle. The central star is still visible at a photographic magnitude of 16.5, and is variously sized from 0.6 solar masses to 0.9 solar masses at temperatures from below 100,000K to above 170,000K. Combining the observed morphology with measurements of the velocity field across the nebula, it becomes quite difficult to construct a physical model for just how this central star ejected its envelope. The two current best suggestions are a double coaxial toroid, and a distorted double coaxial toroid on the surface of a cone. Both models have some trouble reproducing both the surface brightness variations and the velocity structure, but the conical model is slightly better. Conical ejection could be due to rotation of the stellar envelope, to preferential ejection along the magnetic poles of an oblique rotator, to the structure of the extended pre-planetary phase being frozen-in, or even to the effect of a common-envelope close binary. Clearly, an explanation is not yet forthcoming, and M76 continues to be one of the more interesting and attractive planetary nebulae in the sky. Location: 01 38.8 +57 19 (1950.0), distance: about 2500 light-years but very uncertain, size: about 0.7 light-years across, obviously also uncertain. This image was created from data taken in December 1996 at the WIYN 0.9-meter Telescope. Image size 4.8 arc minutes.