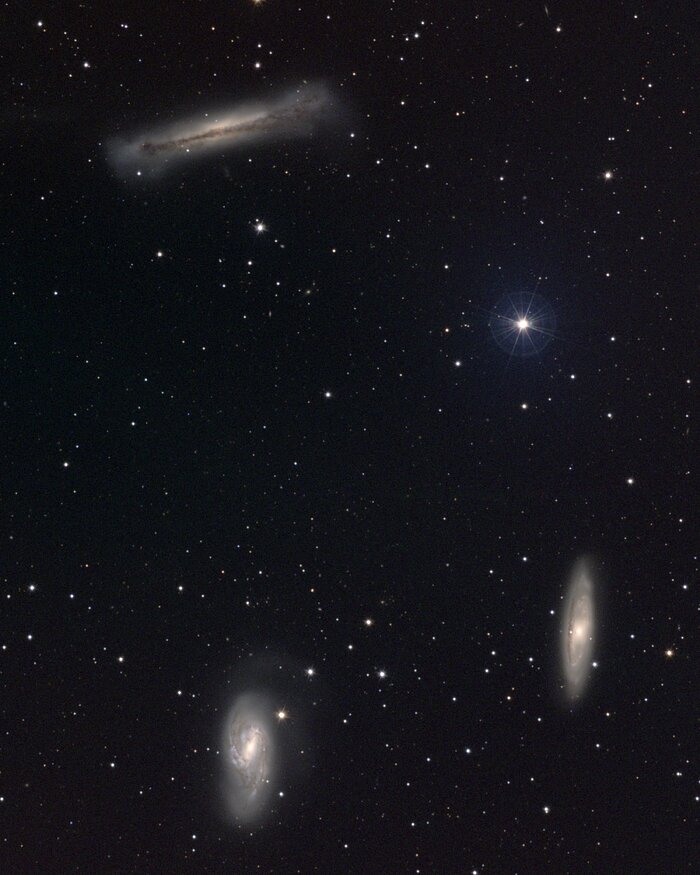 This small group of galaxies consists of the Messier objects M65 (NGC3623), lower right, and M66 (NGC3627), lower left, along with the edge-on spiral galaxy NGC3628, upper left. These three galaxies form a rather attractive triplet at the heart of the M66 group, which includes a number of other galaxies which are "out of shot". The Leo Triplet also appears in Arp's Atlas of Peculiar Galaxies. At a distance of 35 million light-years, maybe a little further, the M66 group may be related to M96 (NGC3368) and the Leo I galaxy group. This approximately true-color picture was created from images taken in June 1995 using BVR colors, at the Burrell Schmidt telescope of Case Western Reserve University's Warner and Swasey Observatory located on Kitt Peak, near Tucson, Arizona, during the Research Experiences for Undergraduates (REU) program operated at the Kitt Peak National Observatory and supported by the National Science Foundation. Image size 40.6x50.8 arc minutes.

Credit:
REU program/NOIRLab/NSF/AURA/
Usage of NOIRLab Images and Videos
Are you a journalist? Subscribe to the NOIRLab Media Newsletter.