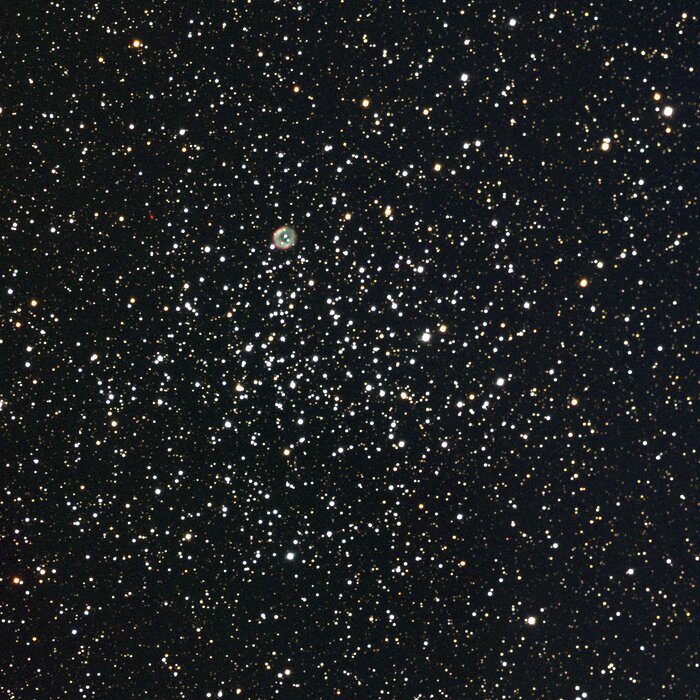 M46 is a rich open star cluster in the constellation Puppis. Within a diameter of 28 arc minutes, or about 30 light-years at its distance of 5400 light-years, M46 contains over 150 bright stars and a total population perhaps over 500. M46 is probably around 300 million years old. It is also noteworthy for the presence of the planetary nebula NGC2438 on its northern edge (up and left of center). NGC2438 is almost certainly not physically associated with M46 due to is probable evolutionary history, its significantly diffferent velocity, and a distance estimate only a little more than half the distance to M46. There is also an interesting extremely red object to the east (left) of the planetary. This is not a camera flaw, but a bipolar protoplanetary nebula with the sonorous name OH231.8+4.2 (also IRAS 07399-1435, but that doesn't sound as good). It is also in the foreground, even closer to us than is NGC2438. This rather complex, somewhat controversial, object contains two expanding lobes showing both emission and reflection nebulosity. Most of this nebular material was ejected from a central star during its evolution through the asymptotic giant branch. It's also a very interesting object to observe at infrared wavelengths. This approximately true-color image was created from eleven images taken in the BVR pass-bands at the Burrell Schmidt telescope of Case Western Reserve University's Warner and Swasey Observatory. The Burrell Schmidt is located on Kitt Peak, near Tucson, Arizona. The images were taken in September 1997.