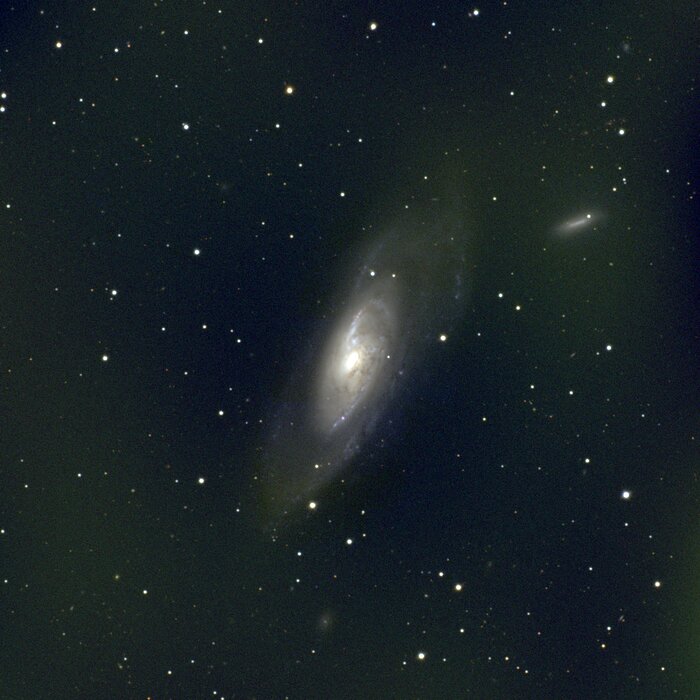 M106 is a type Sb spiral galaxy in the constellation Canes Venatici. More edge-on than not, at a similar inclination to M31, its prominent dust lanes trace spiral structure back almost to its nucleus. M106 is around 25 million light-years away and may be a member of a loose galaxy grouping which includes M108 and M109, although some have placed it in a different group. A somewhat peculiar spiral, sometimes considered to have hints of a bar, M106 is also a Seyfert galaxy, showing strong emission lines in spectra of its nucleus. This full color image was created from nine images taken in the BVR pass-bands at the Burrell Schmidt telescope of Case Western Reserve University's Warner and Swasey Observatory. The Burrell Schmidt is located on Kitt Peak, near Tucson, Arizona. The images were taken in June 1996 during the Research Experiences for Undergraduates (REU) program operated at the Kitt Peak National Observatory and supported by the National Science Foundation. North is at the top with east to the left.

Credit:
N.A.Sharp, REU program/NOIRLab/NSF/AURA/
Usage of NOIRLab Images and Videos
Are you a journalist? Subscribe to the NOIRLab Media Newsletter.