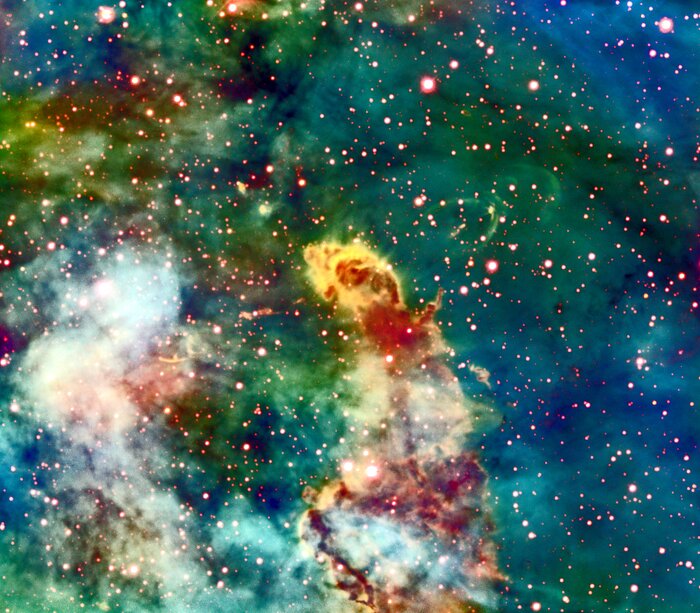 This image from the Blanco 4-meter telescope at Cerro Tololo Inter-American Observatory in Chile was used to discover an extremely large outflow in the Carina Nebula, known as Herbig-Haro 666 (HH 666). Ionized gas squirts out along the polar axis of the hidden young star in this jet-like outflow at speeds up to 500,000 mph. Other infrared images reveal a reddened star (HH 666 IRS) embedded in the molecular globule lying along the jet axis. This young star has been identified as the likely driving source of the bipolar jet. Scorched by ultraviolet radiation from nearby hot stars, HH 666 includes several twisted knots and large bow shocks. All of these elements conspire to form a single, coherent outflow stretching 10 light-years or more in distance. [See image version with labels.] Herbig-Haro objects are emission nebulae that result primarily from shocks in the outflowing jets from young stellar objects. These outflows are an integral part of the accretion process that is believed to form low- and intermediate-mass stars, and thus such jets give us a direct indication that star formation is still occurring nearby. HH 666 is the first protostellar jet to be identified in this turbulent nebula, a giant star-forming region in the southern hemisphere sky. *This discovery was published in the May 2004 Astronomical Journal.