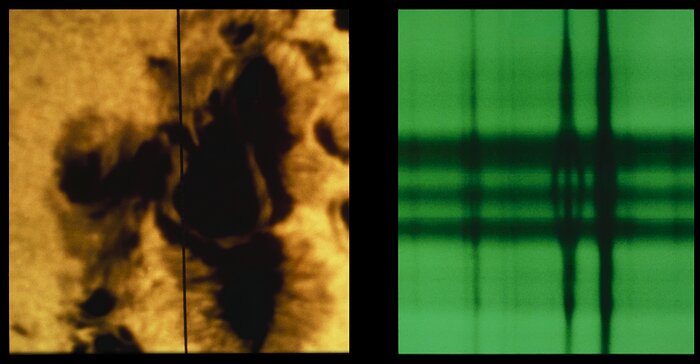 A complex sunspot picture, taken at 15:30 hours UT on 4th July 1974. The vertical black line on the white light image (left) indicates the location of the slit for the spectrograph which took the spectrum, shown on the right. The division of one spectral line into three parts is a clear demonstration of the Zeeman effect. In fact, the Zeeman splitting of this line, at 5250.2 Angstroms and coming from the element iron, indicates a record field strength of 4130 Gauss. The white light photo shows a sinuous light bridge which divides the spot's umbra into different magnetic polarities. Twenty minutes before this picture was taken, a major 2B white light flare occurred. This picture was taken at the McMath-Pierce Solar Facility on Kitt Peak.

Credit:
NSO/AURA/NSF
Usage of NOIRLab Images and Videos
Are you a journalist? Subscribe to the NOIRLab Media Newsletter.