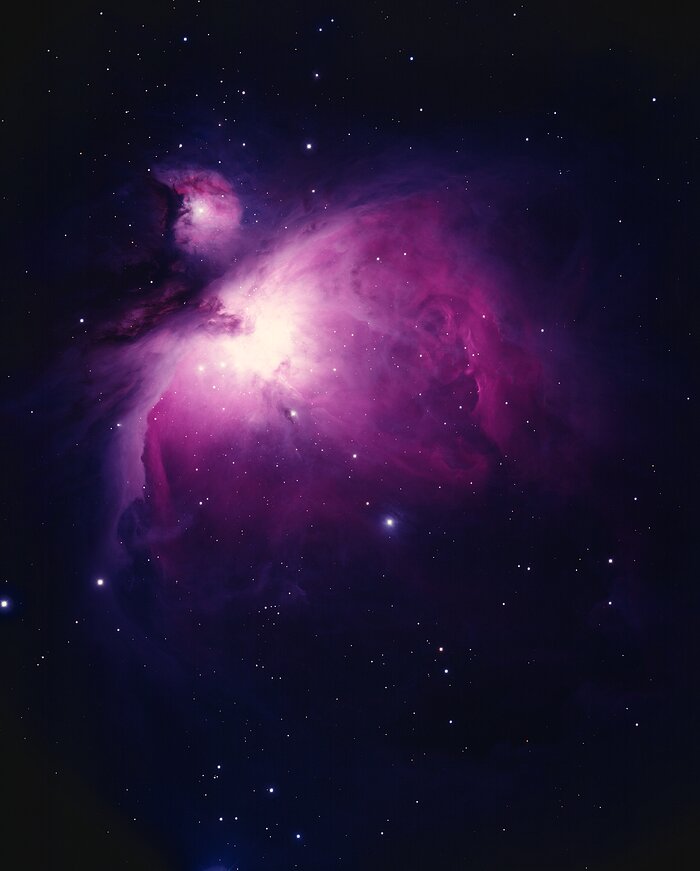 The Orion Nebula (M42/M43, NGC1976/1982) This picture shows the great nebula in the constellation of Orion the Hunter. On a good clear night, from a dark site well away from the lights of modern civilization, this glowing cloud of gas and dust can be seen with the naked eye as a fuzzy patch surrounding the star Theta Orionis in the Hunter's Sword, below Orion's belt. It is probably the most spectacular of all the objects cataloged by Charles Messier and now called by their `M' numbers. M42 had been known since the beginnings of recorded astronomy as a star, but it is so outstanding that it was first noted as an extended nebula in 1610, only a year after Galileo's first use of the telescope. Detailed descriptions started appearing later in the seventeenth century, and it has been a popular target for anyone with a telescope ever since. So many details are visible in even a small telescope that M42 will more than repay the observer who makes it a frequent target, and who will find that it is hard to make a realistic sketch that can capture all of the finer features. So outstanding is this nebula that it has two numbers. M43/NGC1982 is the separated portion to the north-east (top left), surrounding an irregular variable star. Although Messier stopped at only two, other parts of the nebula in this region have received further NGC numbers. M42 is our closest example of an HII region, being composed mainly of ionized hydrogen which gives off the red glow so dominant in every picture of the nebula. Deep photographs such as this one show that it is nearly a degree across, larger than the full Moon (although the Moon is so bright that it looks much larger). The energy to keep the nebula glowing comes from the very hot young stars in a formation called the Trapezium, embedded in the brightest part of the nebula and not visible in this photograph. The nebula and the brighter stars are very young indeed by astronomical standards, at about 30000 years. Compare this to our own Sun, which is considered to be a middle-aged star at over four billion years! M42 probably contains several hundred stars younger than a million years, still bursting with the energy of youth. Stars are still being born in a dense cloud behind the nebula, but they are hidden from our view by a concentration of dust which reduces their light to only a million-millionth of its original intensity. Fortunately, astronomers have developed special cameras and other detectors which are sensitive to infra-red radiation, more popularly known as heat, which penetrates the dust and reveals to us this stellar nursery. Although M42 is mostly hydrogen, in both neutral and ionized states, with a fair quantity of dust, it does contain significant amounts of other elements, especially oxygen. The green glow of doubly-ionized oxygen is strongest near the intense ultraviolet starlight at the middle of the nebula. To the north-east (the upper left in this picture) is a feature called the Dark Bay, which is a thick cloud of neutral gas which has not yet been ionized. Location: 05 hrs 35.4 min, -05 deg. 27 min (2000). Distance: nearly 500 parsecs (1600 light-years). Size: about 66 by 60 arc minutes. Mass: about 300 solar masses. Magnitude: 4.0. Power source: O and B stars. Photograph: Bill Schoening, KPNO 4m telescope, October 1st 1973. Original Ektachrome color transparency.