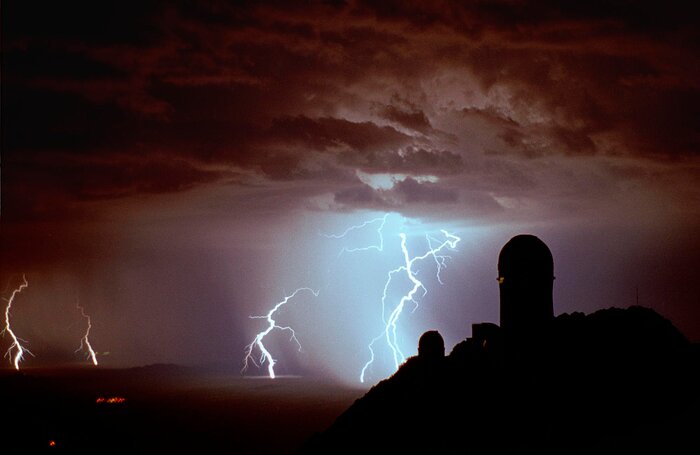 Lightning atop Kitt Peak, looking to the north-west, with the Mayall 4-meter telescope silhouetted against the stormy sky. Taken by Adam Block in July 1998. This picture was a twenty second exposure using Fuji 800 film with a 50mm camera lens. To most people's surprise, good lightning shots are not difficult to take. You need to have a manual camera with a bulb setting, which you set on a stable surface or tripod. All that is then necessary is to keep the shutter open until at least one lightning flash has occurred, and then release. You can also keep the shutter open for any number of lightning bolts of any kind. However, certain conditions make taking such pictures easier. If the sky is not especially dark, then one must shorten the length of an exposure while waiting for lightning. Also, if the storm is very close the lightning will be seen over the entire sky, so having the storm at a distance makes it easier to capture many strokes (and a bit safer as well). This particular storm was around fifteen to twenty miles away, and you can see how well the lightning illuminates the ground.

Credit:
Adam Block/NOIRLab/NSF/AURA/
Usage of NOIRLab Images and Videos
Are you a journalist? Subscribe to the NOIRLab Media Newsletter.