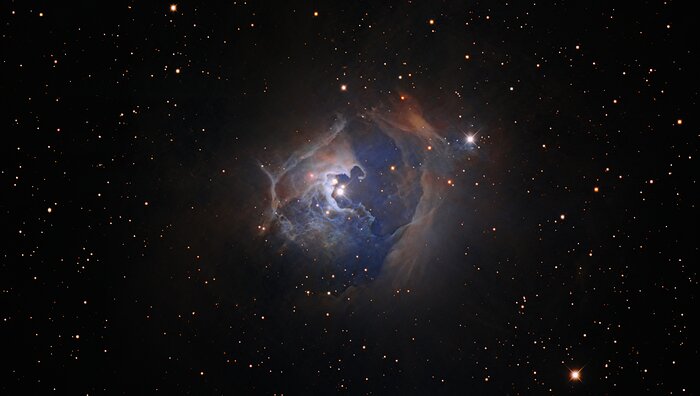 This observation captures the variable star HP Tau, which lies more than 550 light-years from Earth in the constellation Taurus. This image was created using data from the Nicholas U. Mayall 4-meter Telescope at Kitt Peak National Observatory (KPNO), a Program of NSF’s NOIRLab. HP Tau is a T Tauri star, a young and chaotic type of star that is settling into a more sedate phase of stellar life known as the main sequence. The length of time that a star spends on the main sequence will depend on its mass. Our Sun, for example, is about halfway through its roughly 10-billion-year main-sequence lifetime.

HP Tau is part of a triple star system — the three separate stars are visible at the center of this image — surrounded by a large arcing reflection nebula. These nebulae, as the name suggests, reflect the light from nearby stars rather than glowing like emission nebulae elsewhere in the Universe.