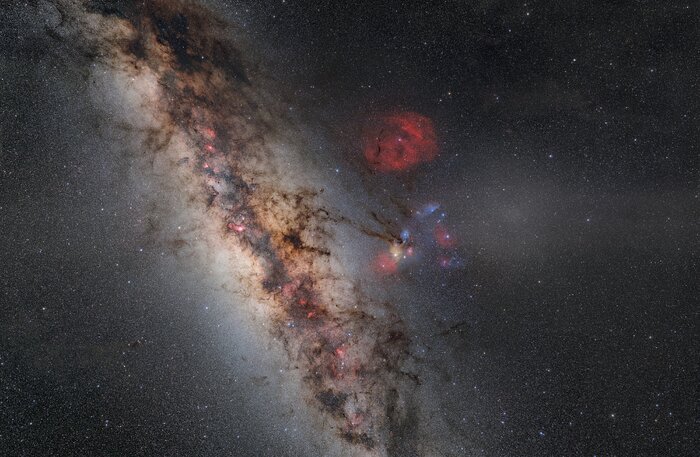 Looking past Earth’s brightly lit atmosphere, incredibly brilliant and colorful celestial objects exist in the vast expanse of space. The Milky Way is the most conspicuous of these nighttime objects, captured here near Cerro Pachón in Chile, home to several facilities operated by NSF's NOIRLab, including half of the International Gemini Observatory, the SOAR Telescope and Vera C. Rubin Observatory. The Milky Way’s luminous disk is partially obscured by the interstellar clouds of dust known as the Great Rift. Some of the rift’s dark nebulae fragments appear to stretch into the nearby neighborhood of nebulae. The small grouping of colors is known as the Rho Ophiuchi cloud complex, a dynamic bunch made of reflection nebulae, scattering bright blue and yellow hues from nearby stars, and emission nebulae, diffusing the reddish glow of hot hydrogen gas. Hidden among this interstellar complex are the stars Rho Ophiuchi itself and the ‘heart’ of Scorpius, Antares. ‘Above’ this vibrant group is a much larger deep red emission nebula known as Sh2-27, surrounding the star Zeta Ophiuchi.

The diffuse light to the right of the center is the gegenschein, which is caused by sunlight that is scattered back from dust particles in the outer Solar System. The dust that produces the zodiacal light and Gegenschein comes from a variety of sources, including comet tails and asteroid collisions.

This 170-megapixel photo was taken as part of the recent NOIRLab 2022 Photo Expedition to all the NOIRLab sites. Explore the details of the image with the zoom feature.