A Galaxy of Birth and Death 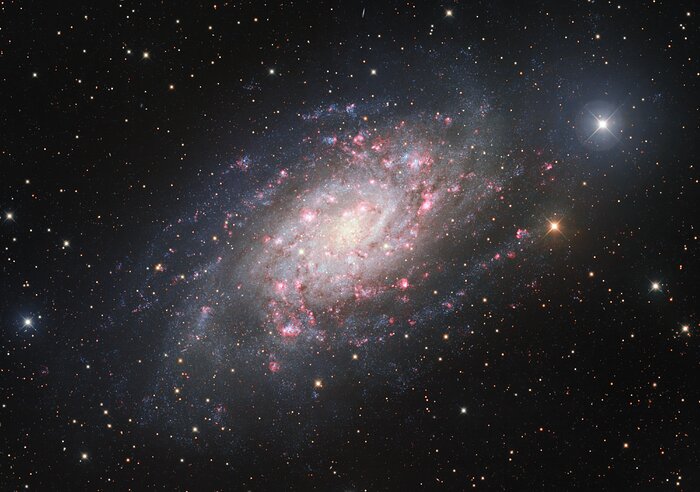 Captured by the Mosaic camera on the Nicholas U. Mayall 4-meter Telescope at the Kitt Peak National Observatory (KPNO), a Program of NSF’s NOIRLab, the spiral galaxy NGC 2403, also known as Caldwell 7, highlights the dynamic birth and death of stars. The glowing red spots dotting the galaxy are clouds of ionized hydrogen gas known as HII regions. These areas indicate the birth of young, hot stars, which often ionize nearby hydrogen gas during their dynamic formation. Conversely NGC 2403 has also been the home of the brightest and nearest observed death of a star this millennium: the supernova SN 2004dj. The region in NGC 2403 that contained the star which became a supernova in 2004 had been observed both before, during and after the explosion, providing a fascinating timeline of the impact of the event. Since star formation occurs on a timescale much longer than a human lifetime, the process has to be pieced together like a puzzle through observations of different stars in different stages of the stellar life cycle. It is very satisfying for astronomers to be able to observe supernovae, which occur incredibly quickly even by human standards, to confirm and develop theories of the life cycle of stars.