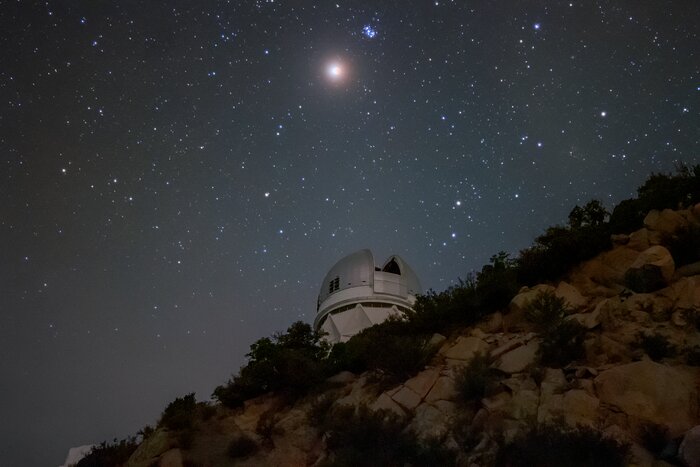 Shown here is the partial lunar eclipse of 19 November 2021 as seen from Kitt Peak National Observatory, a Program of NSF’s NOIRLab. This Image of the Week captures the eclipse above the Nicholas U. Mayall 4-meter Telescope in the Arizona-Sonoran Desert of Arizona.

While technically a deep partial eclipse with 97% of the Moon in Earth’s shadow, or umbra, this eclipse was deep enough to give the Moon a pronounced red tint and decrease its brightness. The only light the Moon ever “shines” with is reflected sunlight. But while the Moon is within the umbra, the sunlight illuminating the Moon is scattered by Earth’s atmosphere. Essentially passing through a prism, the sunlight refracts in Earth’s atmosphere and takes on a crimson hue, which then illuminates the Moon. This hue can be seen in this image, taken on the same night through a 600-mm focal length camera lens (equivalent to a small telescope).

Despite being dimmed in the eclipse, the Moon still brightens the dome of the Mayall telescope with a red glow.

The next total lunar eclipse will take place on 15–16 May 2022, and will be visible over the Americas and parts of western Europe and Africa.