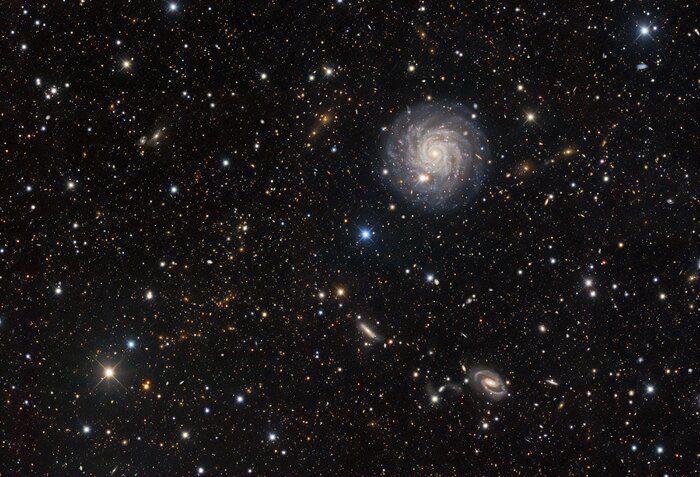 This Image of the Week features a sky speckled with stars and galaxies. The most prominent galaxy, in the upper right quadrant of the image, is known as NGC 1703. It was observed using the Dark Energy Camera (DECam), a high-performance camera installed by the US Department of Energy at the Víctor M. Blanco 4-meter Telescope at Cerro Tololo Inter-American Observatory (CTIO), a Program of NSF’s NOIRLab. NGC 1703 lies in a region of the sky that constitutes the constellation Dorado, the dolphinfish. You may know this fish by its Hawaiian name, mahi-mahi. The constellation was named Dorado back in the 16th century and the name was made official in the early 20th century. It is one of the 88 astronomical constellations recognized by the International Astronomical Union. So NGC 1703 could fancifully be thought of as one of the Dorado’s more impressive scales. Use the interactive zoom tool to explore the thousands of background galaxies, each with billions of stars like our Sun.