The Circle of Light 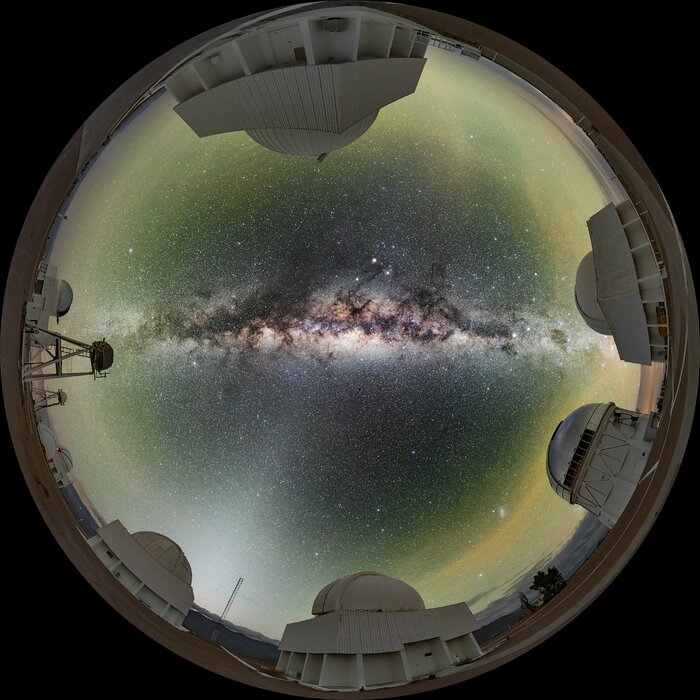 Reality seems to be reversed in this striking Image of the Week. It appears as though the telescopes of the Cerro Tololo Inter-American Observatory (CTIO), a Program of NSF’s NOIRLab, are growing around the edge of a deep well of stars — or alternatively, as though the night sky is being reflected exceptionally crisply in a perfectly circular pool. This mind-bending effect is achieved by using a specialized camera lens called a fisheye. Fisheye lenses have a bulbous shape, which enables them to capture hemispherical images, but also causes the image to be significantly distorted — something that conventional lenses are designed to avoid. However, that distortion can be used to create striking effects such as the wraparound effect in this image, where the ground appears to have been scooped into a circle. Several of the telescopes housed at CTIO are visible around the edge of this image, including (clockwise from the top): the SMARTS 0.9-meter Telescope, the SMARTS 1.5-meter Telescope, the Víctor M. Blanco 4-meter Telescope, the Curtis Schmidt Telescope, the SMARTS 1.0-meter Telescope and the decommissioned DIMM1 Seeing Monitor.