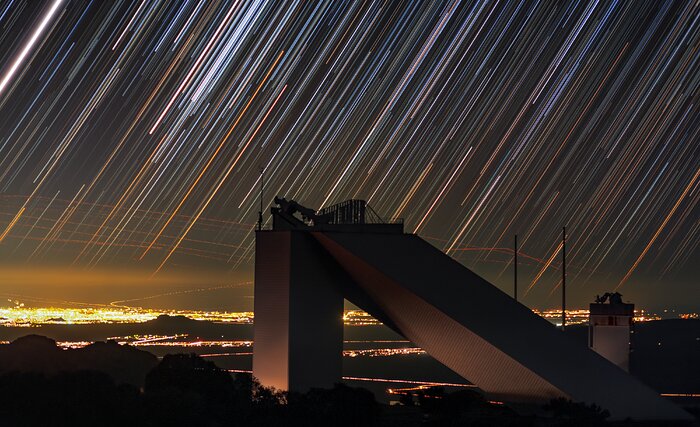 This striking image centers on the decommissioned McMath-Pierce Solar Telescope, which is located at the Kitt Peak National Observatory (KPNO), a Program of NSF’s NOIRLab. The McMath-Pierce Solar Telescope saw first light in 1962, and continued operating for an impressive 55 years, until being decommissioned in 2017. For much of its life, it was the largest solar telescope on Earth. Observing the Sun might seem like a fairly straightforward task, given that one of the biggest challenges that astronomers typically face is collecting sufficient light from the very distant stars, planets, and galaxies that they wish to observe. In astronomical terms the Sun is very close to Earth, and it is by far the brightest object in our Solar System, so collecting sufficient light is indeed far less of a challenge. However, sunlight brings something in abundance that starlight does not — heat. Cooling is an enormous challenge for solar telescopes. Heat from sunlight easily heats up the air within the telescope’s tunnel and distorts the final data collected by astronomers. But for the McMath-Pierce Solar Telescope, designers were able to use special paint, pipes with cooling liquid, and natural cooling effects of the underground to chill the bottom of the 61-meter (200-foot) optical path about 6 °C (11 °F) below the outside ambient temperature. Though decommissioned, the facility is being repurposed as the NOIRLab Windows on the Universe Center for Astronomy Outreach.